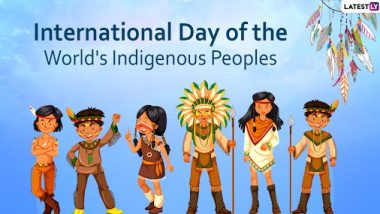 The International Day of the World’s Indigenous Peoples is commemorated worldwide on August 9. On this special day dedicated to indigenous peoples, their human rights, languages, ancient histories, and rich cultures, several activities are taking place worldwide. The special day marks the day of the first meeting, in 1982, of the UN Working Group on Indigenous Populations of the Sub-Commission on the Promotion and Protection of Human Rights. On this day, people around the world are encouraged to spread the UN’s message on the protection and promotion of the rights of indigenous peoples.

This year, the world is fighting against the spread of the pandemic and it is more important than ever to safeguard indigenous peoples. According to the United Nations, the indigenous peoples' territories are home to 80% of the world’s biodiversity. They can teach us much about how to rebalance our relationship with nature and reduce the risk of future pandemics.

On December 23, 1994, the United Nations General Assembly decided, in its resolution 49/214, that the International Day of the World’s Indigenous People shall be observed on August 9 every year. The date marks the first meeting, in 1982, of the UN Working Group on Indigenous Populations. In 2020, the International Day observance will take place on Monday, August 10, 2020 from 9 am to 11 am in a virtual event. The UNESCO policy on Engaging with Indigenous Peoples seeks to outline a house-wide approach that will guide all of UNESCO’s programme sectors in their interactions with indigenous peoples and their organizations.

This year’s theme is 'COVID-19 and indigenous peoples’ resilience' and a virtual event will feature a panel discussion on the innovative ways indigenous peoples continue demonstrating resilience and strength in the face of the pandemic, while confronting grave threats to their survival.

Each year, UNESCO marks the celebration of the Day by sharing information on projects and activities that are relevant to the annual theme. On this day, the UNESCO seeks to support the indigenous peoples in addressing the multiple challenges they face, while acknowledging their significant role in sustaining the diversity of the world’s cultural and biological landscape.  At least 370-500 million, indigenous peoples represent the greater part of the world’s cultural diversity, and have created and speak the major share of the world’s almost 7000 languages.

Many indigenous peoples continue to be confronted with marginalization, extreme poverty and other human rights violations. The 2030 Agenda commitment to ‘Leave no one behind’ brings new impetus to ensure that indigenous peoples’ priorities are heard.

(The above story first appeared on LatestLY on Aug 08, 2020 08:30 PM IST. For more news and updates on politics, world, sports, entertainment and lifestyle, log on to our website latestly.com).