Marathi Bhasha Din 2021 date, its history and more, know everything about the day observed on the birth anniversary of eminent Marathi poet Vishnu Vaman Shirwadkar (also known as Kusumagraj). 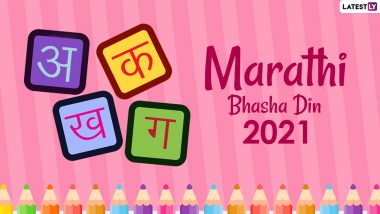 Marathi Language Day is celebrated annually on February 27 across the Indian states of Maharashtra and Goa. Also known as Marathi Bhasha Din, Marathi Din or Marathi Diwas, the day is extremely important among the Marathi communities. Different events are organised to mark the day; however, this year, it will be different. Because of the pandemic, individuals are encouraged to celebrate Marathi Bhasha Din from home. No huge gatherings are allowed. In this article, we will know a little more details about the significant event. Marathi Bhasha Din 2021 date, its history and more, know everything about the day observed on the birth anniversary of eminent Marathi poet Vishnu Vaman Shirwadkar (also known as Kusumagraj).

Marathi Bhasha Din is observed every year on February 27. The date was chosen to honour the birth anniversary of the famous Marathi poet, Vishnu Vaman Shirwadkar famously known as Kusumagraj, who was born on February 27, 1912. Marathi Language Day 2021 is on the same day.

Marathi Language Day is celebrated annually on February 27. The day is observed by Marathi-speaking people in the state to honour the rich history and literature associated with it. It holds a lot of significance for the people in the Marathi community. Vishnu Vaman Shirwadkar, famously known as Kusumagraj, was a noted Marathi poet and was born on this date in 1912 at Pune, Maharashtra.

He wrote of freedom, justice and emancipation of the deprived. In a career spanning five decades starting in the pre-independence era, he wrote about 16 volumes of poems, three novels, eight volumes of short stories, seven volumes of essays, 18 plays and more. To honour his work in Marathi literature, the birthday of Kusumagraj on February 27 is celebrated as Marathi Bhasha Din.

Various educational and cultural programs are held on this day, honouring his notable works in Marathi literature. But this year, celebrations are limited because of the ongoing global health crisis.

(The above story first appeared on LatestLY on Feb 25, 2021 04:49 PM IST. For more news and updates on politics, world, sports, entertainment and lifestyle, log on to our website latestly.com).