Mysore Dasara is a ten-day festival held in the Indian state of Karnataka that starts on Navratri and ends with Vijayadashmi. Mysuru Dasara 2020 began on October 17 and ends on October 27. Vijayadashami is of much importance to the celebration which is also celebrated as Dasara, during which a procession is held on the streets of Mysore. 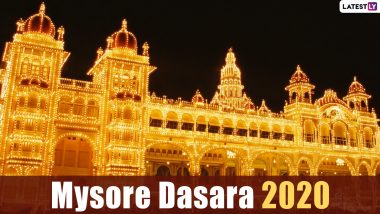 Happy Mysore Dasara 2020! The celebration of a ten-day festival held in the Indian state of Karnataka is observed wit great pomp. It starts on Navratri and ends with Vijayadashmi and this year Mysuru Dasara 2020 began on October 17 and ends on October 27. Meanwhile, we bid Maa Durga and you can share Maa Durga HD images, Facebook messages and GIF greetings to celebrate Vijayadashami. For those who don't know, Vijayadashami is of much importance to the celebration which is also celebrated as Dasara, during which a procession is held on the streets of Mysore. An image of Goddess Chamundeshwari is placed on a golden howdah on the back of a decorated elephant and taken on a five-kilometre-long procession with dance, music, horses and camels. It starts from Mysore Palac and culminates at Bannimantapa, where the Banni tree is worshipped. Elephant parade or Jumbo Savar is another highlight of the event. Mysuru Dasara 2020 Celebrations: Karnataka Govt Issues Recommendations of Technical Advisory Committee, Asks Organisers to Make Celebrations Virtual For Public.

While Mysore Dasara is celebrated with grand festivities, due to ongoing coronavirus pandemic, the Karnataka government on Tuesday decided to curtail the festivities and keep it a low-key event this year. The festival celebrates the victory of Goddess Durga over the devil Mahishasuru. Locally, the festival is called Nadahabba. Various cultural celebrations and festivities are held during the event. There is also a display of swords, weapons, elephants and horses. Dasara 2020: Nine Day Dasara Festival Gets Off to Colourful Start at Kanaka Durga Temple in Vjayawada.

The Mysore Palace is lit fully on all days of the festival. The tradition of celebrating Mysore Dasar completed its 400th anniversary in 2010. Tourists from various part of the country and outside come together to watch the event. However, this year the event won't be held in its regular grandeur.

(The above story first appeared on LatestLY on Oct 25, 2020 12:02 PM IST. For more news and updates on politics, world, sports, entertainment and lifestyle, log on to our website latestly.com).