Sardar, throughout his life, strove for the goal of an independent, sovereign and unified India with no clutches of colonial rule. After India attained freedom, Sardar served as the Deputy Prime Minister and Home Minister in the first government. He is credited to have played the major role in integration of 565 princely states after the British regime left. 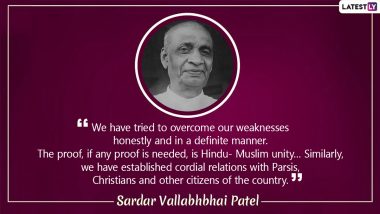 New Delhi, October 27: Sardar Vallabhbhai Patel, also known as the "Iron Man of India" and the "Unifier of India", was born on October 31 in the year 1875. The day is annually observed as Rashtriya Ekta Diwas or the National Unity Day, with citizens across the nation recalling and commemorating his valour and efforts to unify the country and prevent its disintegration. On the 145th birth anniversary of Sardar Patel, the citizens can share his inspiring quotes which re-instill the message of unity. Congress to Observe Kisan Adhikar Diwas on October 31.

Sardar, throughout his life, strove for the goal of an independent, sovereign and unified India with no clutches of colonial rule. After India attained freedom, Sardar served as the Deputy Prime Minister and Home Minister in the first government. He is credited to have played the major role in integration of 565 princely states after the British regime left.

The quotes of Sardar, as shared below, reflect his unwavering belief in unity and his adherence to the principle of Indian nationalism. He wanted the countrymen to break free from the shackles of division, and consider their common nationality identity as the biggest binding factor.

Sardar Patel's Quote Reads: "We have tried to overcome our weaknesses honestly and in a definite manner. The proof, if any proof is needed, is Hindu- Muslim unity… Similarly, we have established cordial relations with Parsis, Christians and other citizens of the country." 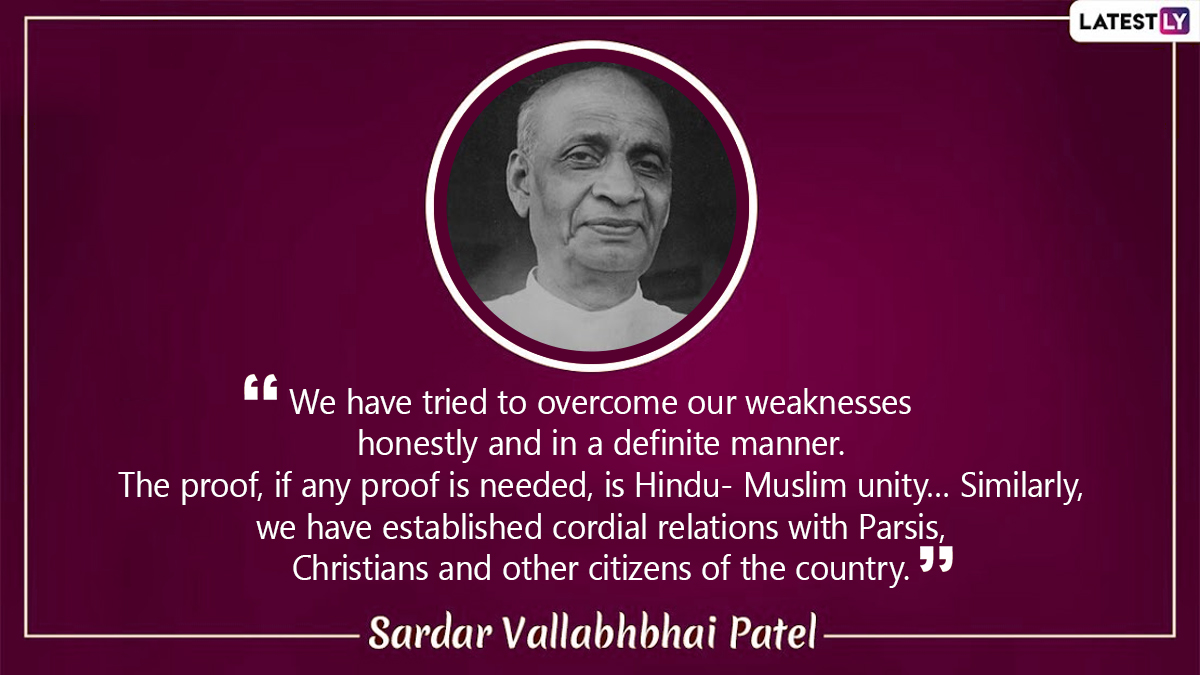 Sardar Patel's Quote Reads: "The negligence of a few could easily send a ship to the bottom, but if it has the wholehearted cooperation of all on board it can be safely brought to part." 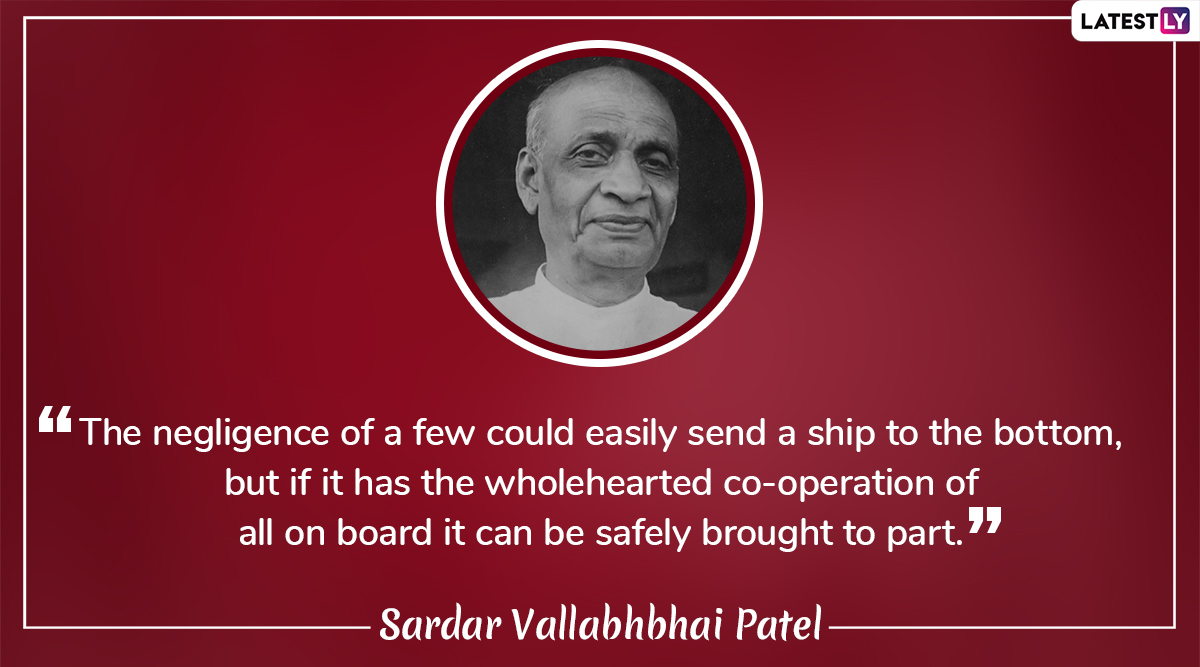 Sardar Patel's Quote Reads: "There is something unique in this soil, which despite many obstacles has always remained the abode of great souls." 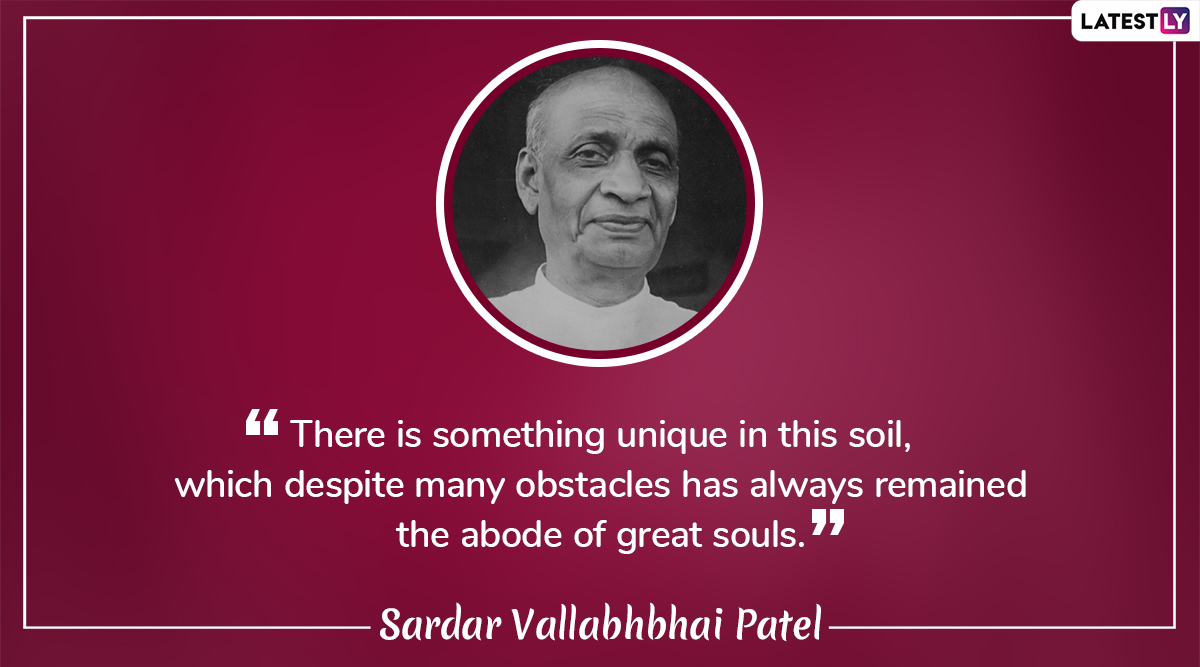 Sardar Patel's Quote Reads: "Every Indian should now forget that he is a Rajput, a Sikh or a Jat. He must remember that he is an Indian and he has every right in his country but with certain duties." 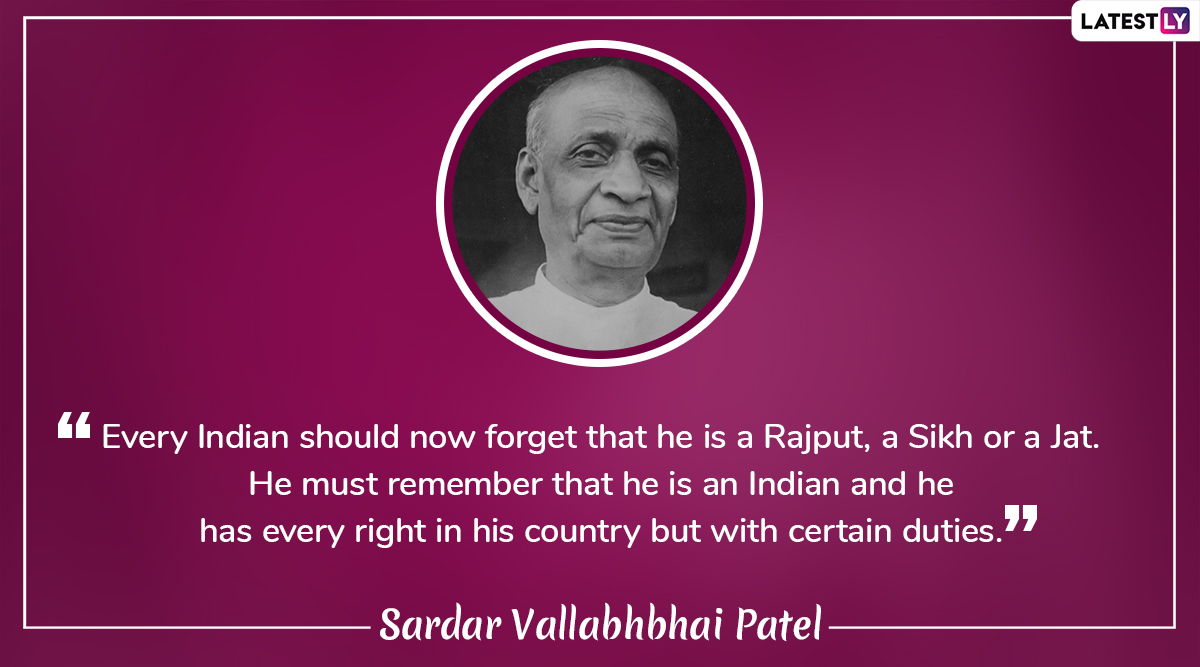 Sardar Patel's Quote Reads: "My only desire is that India should be a good producer and no one should be hungry, shedding tears for food in the country." 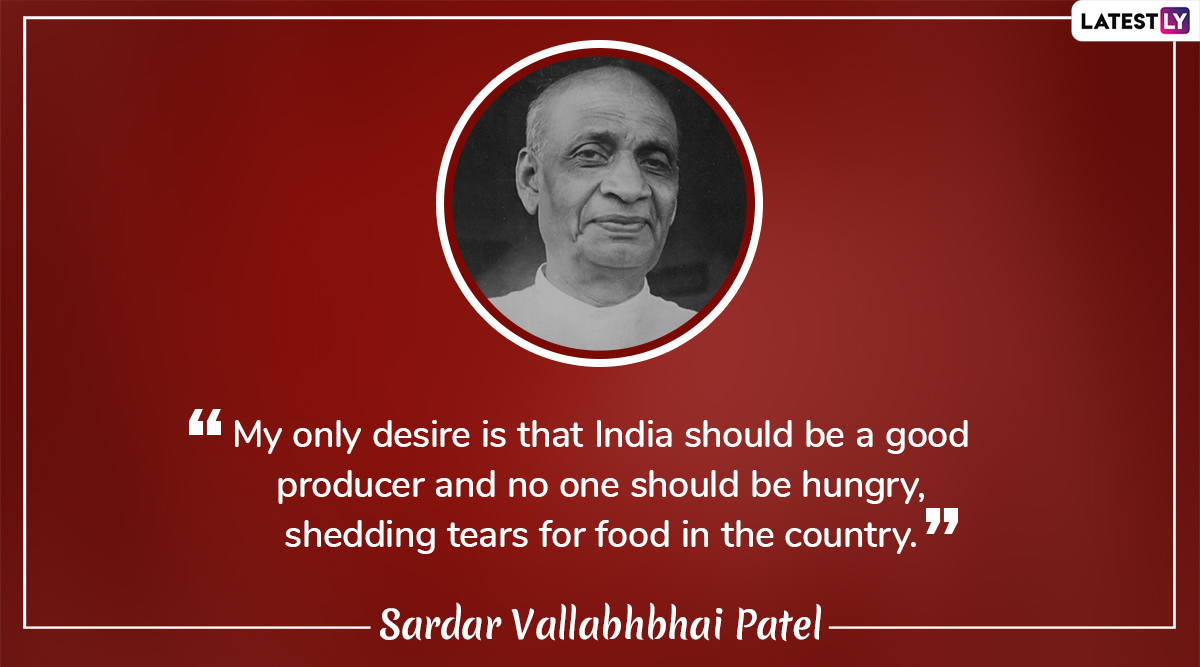 Sardar Patel's Quote Reads: "Faith is of no evil in absence of strength. Faith and strength, both are essential to accomplish any great work." 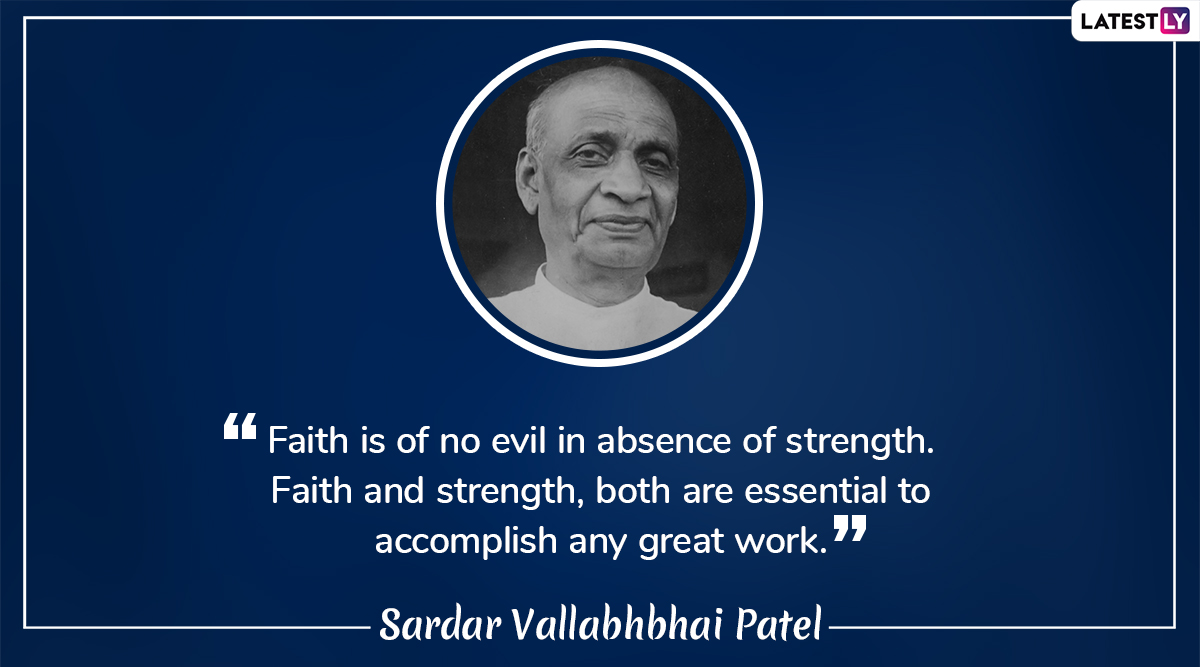 Sardar Patel's Quote Reads: "Take to the path of dharma - the path of truth and justice. Don't misuse your valour. Remain united. March forward in all humility, but fully awake to the situation you face, demanding your rights and firmness." 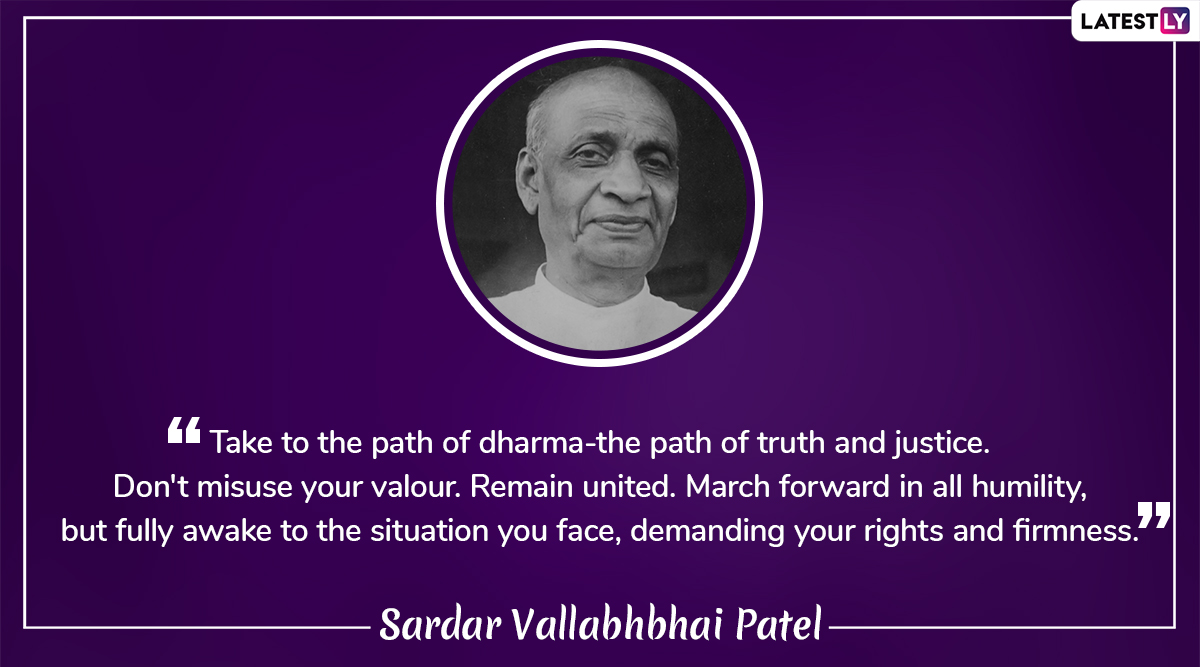 Sardar Patel's Quote Reads: "Little pools of water tend to become stagnant and useless, but if they are joined together to form a big lake the atmosphere is cooled and there is universal benefit." 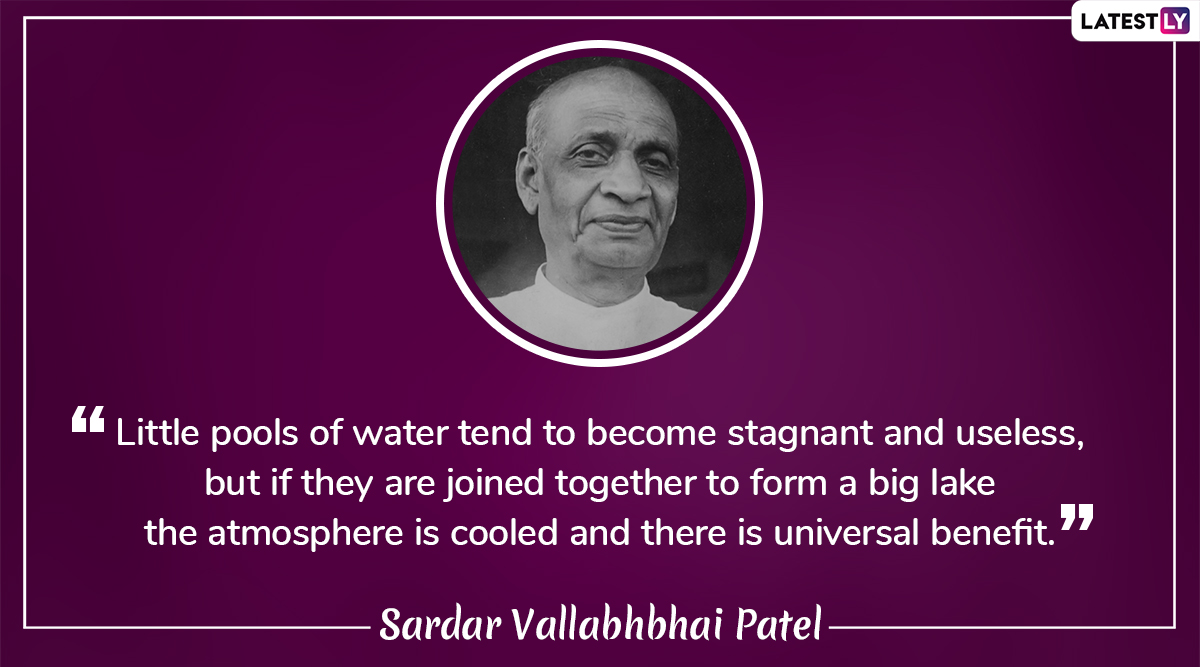 Sardar Patel's Quote Reads: "We have to shed mutual bickering, shed the difference of being high or low, develop a sense of equality and banish untouchability. We have to restore the conditions of Swaraj prevalent prior to British rule. We have to live like children of the same father." 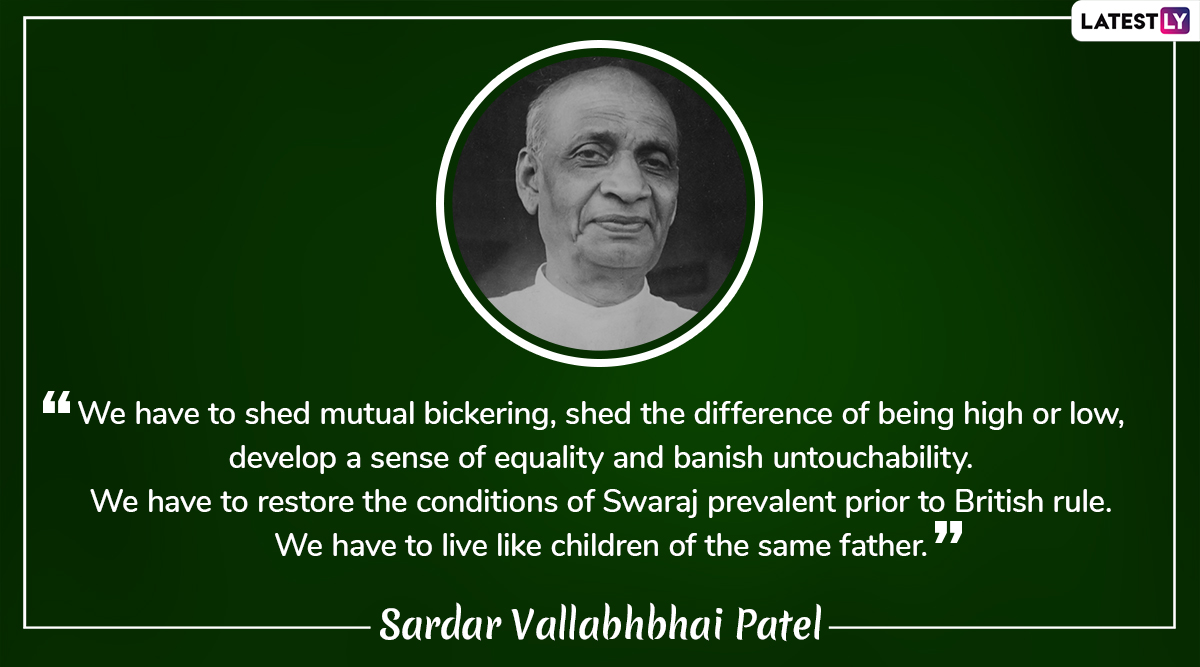 Sardar Patel's Quote Reads:  A war based on Satyagraha is always of two kinds. One is the war we wage against injustice and the other we fight against our own weaknesses. 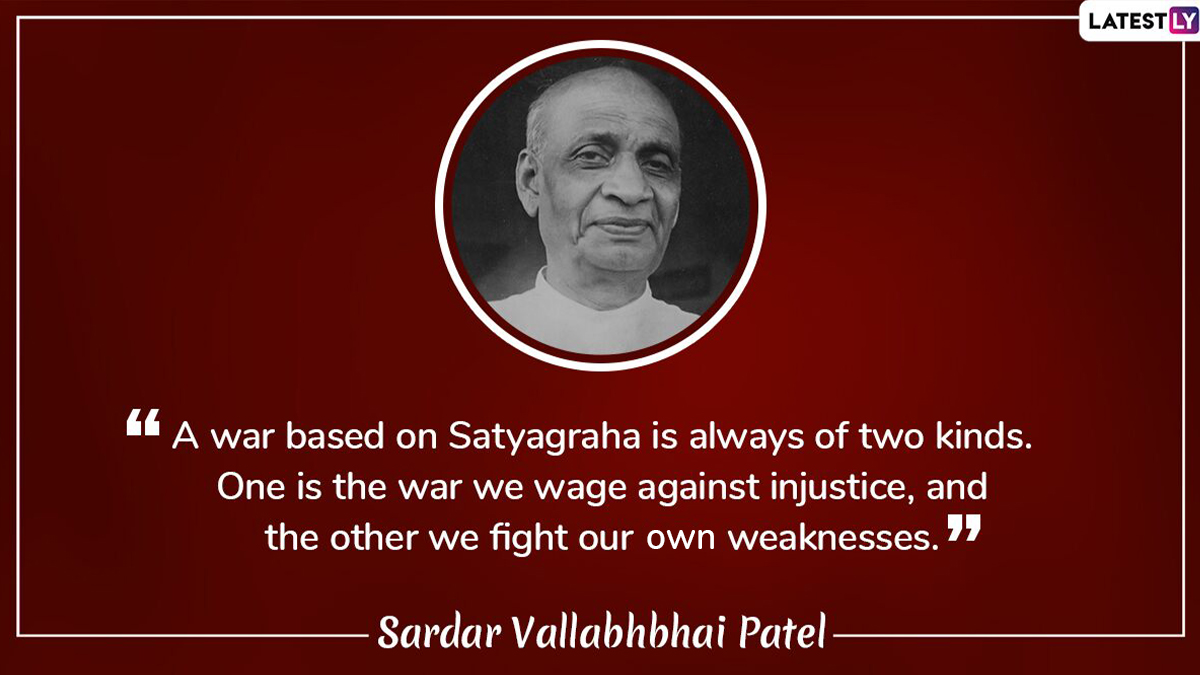 Since 2014, Sardar's birth anniversary is being observed as the National Unity Day. On October 31, 2018, the government inaugurated the 182-metre tall statue of Sardar, which is installed along the Narmada river in Kevadiya, facing the Sardar Sarovar Dam in the late leader's home state of Gujarat. The statue - considered a fitting tribute the man who strove for India's territorial unity - holds the record of being the tallest in the world.

(The above story first appeared on LatestLY on Oct 30, 2020 04:05 PM IST. For more news and updates on politics, world, sports, entertainment and lifestyle, log on to our website latestly.com).