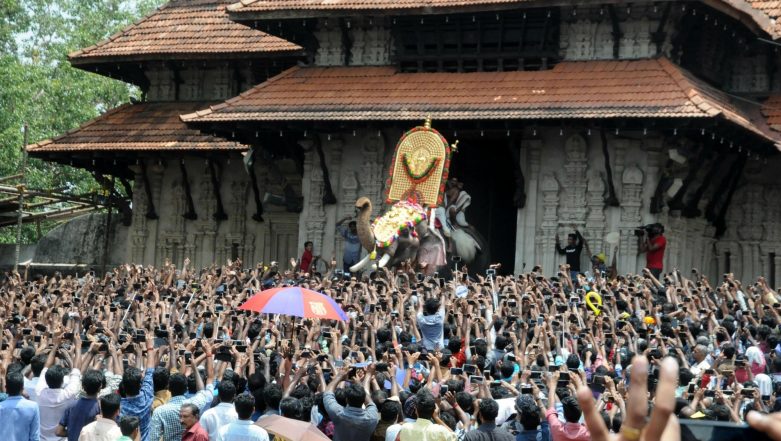 Thrissur (Kerala), May 12: The opening of the famed Thrissur Pooram festival here on Sunday was attended by more than 10,000 people after an order disallowing a 54-year-old tusker from taking part in the festivities was reversed on Saturday. Thrissur Pooram 2019: Elephant Thechikottukavu Ramachandran Arrives at Vadakkumnathan Temple After Being Deemed Fit And Kickstarts Festivities (Pics And Videos).

The tusker, Thechikottukavu Ramachandran, was brought to the Vadakkumnathan temple here in a vehicle at around 10.30 a.m. and he symbolically pushed open the southern entrance of the temple, signalling the start of the festivities. However, the tusker was called back in an hour as directed by Thrissur District Cllector T.V. Anupama, leaving the visitors disappointed.

Ban on 54-year-old elephant Thechikottukavu Ramachandran from Pooram festival in Thrissur: A team of three doctors examined the elephant this morning and declared it medically fit. The elephant will attend the special ritual of the Pooram festival tomorrow. #Kerala pic.twitter.com/Lr3a9LVz7g

"Ramachandran was behaving perfectly. He should have been allowed to complete the ritual..." said T.N. Prathapan, former Congress legislator and party candidate from this Lok Sabha seat.

On Saturday, Ramachandran, who has killed seven people in the past and is considered a tough elephant to handle, underwent a hour-long check-up by a veterinarians' team. The team cleared him as "fit for all activities" and submitted a report to Anupuma, who then decided to allow the pachyderm to do the job that he has been doing since 2014. Elephant to Undergo Medical Test for Thrissur 'pooram'.

Thrissur Pooram is billed as the mother of all festivals in the state and the history of Pooram dates back to the late 18th century. It was started by Sakthan Thampuran, the Maharaja of the erstwhile Kochi state. The most keenly-watched event during the festival is the parading of more than 50 elephants and crackers display, that will take place on Monday afternoon and continue till the wee hours on Tuesday.