Ugadi 2021 Date, History and Significance: Know More About the Yugadi, Telugu New Year and Its Importance

The festival of Ugadi or Yugadi is mainly celebrated as Lunar New Year's Day by the people of Kannada and Telugu communities. The word 'yuga' literally means time and the word 'ari' means beginning. 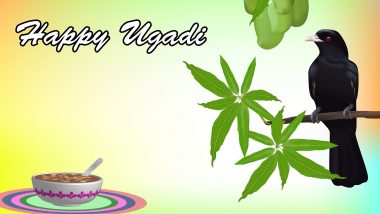 The festival of Ugadi or Yugadi is mainly celebrated as Lunar New Year's Day by the people of Kannada and Telugu communities. The word 'yuga' literally means time and the word 'ari' means beginning. Thus, the Ugadi festival marks the beginning of a new year. According to the Gregorian calendar, the festival takes place in the month of April or March. Many religious events are organized on the day of Ugadi. According to the Hindu calendar, the first day of the Hindu Chaitra month is celebrated as a Ugadi festival.

The festival of Ugadi is popular across the country and is celebrated in various names and cultures such as Gudi Padwa in Maharashtra, Baisakhi in Punjab, Chaiti Chand in Sindhis, Puthandu in Tamil Nadu and Thapana in Rajasthan.

Ugadi is derived from the Sanskrit words ‘yuga’ (age) and ‘adi’ (beginning), “the beginning of the new age.” It has been an important and historic festival of the Hindus, with medieval texts and inscriptions recording significant charitable donations to Hindu temples and community centres. People in Karnataka, Telangana, Andhra Pradesh, Tamil Nadu and Kerala celebrate the festival. According to legends, Ugadi is believed to be the day when Lord Krishna’s Niryaana begun in the early hours of the fortnight of Chaitra. The preparations for the festival usually start a week ahead. Houses are cleaned, people buy new clothes and items, decorate the entrance of their home with mango leaves. Unique dishes are prepared for the occasion.

What is the legend of Ugadi?

According to Hindu scriptures and mythology, it is believed that Lord Brahma started building the universe on this particular day, which is known as Ugadi Day. After that, Lord Brahma created years, weeks, days and months to predict time. Therefore, the day of Ugadi is considered the primary day when the process of creation of the universe started.

(The above story first appeared on LatestLY on Apr 09, 2021 01:45 PM IST. For more news and updates on politics, world, sports, entertainment and lifestyle, log on to our website latestly.com).