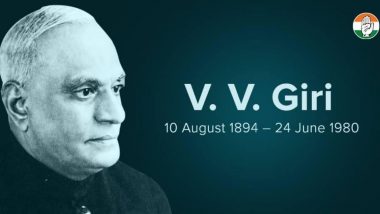 Today, we are celebrating the birth anniversary of India's fourth President Varahagiri Venkata Giri better known as VV Giri. He served as the President of India from August 24, 1969, to August 24, 1974. He was born on  August 10, 1894.

Following the death of the then President Dr Zakir Hussain on May 3, 1969, V V Giri had to officiate as the President. On the occasion of VV Giri's birth anniversary, LatestLY takes a look at some interesting facts about him.

(The above story first appeared on LatestLY on Aug 10, 2020 08:29 AM IST. For more news and updates on politics, world, sports, entertainment and lifestyle, log on to our website latestly.com).