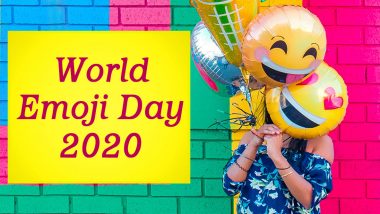 World Emoji Day is a global celebration on July 17 of emojis which was introduced by Jeremy Burge. Emojis have today become an integral part of internet communication everyday new emojis are added to the list. From Facebook, Instagram, WhatsApp to Twitter and other social networking sites, emojis are used. So much so that it is considered a part of the daily conversation among people. As we observe World Emoji Day 2020, we bring to you facts about its origin and other interesting things related to these fun means of communication. New Emoticons For 2020: Emoji 13.0 Unveils 117 New Emoticons And Here's How Twitterati is Reacting.

Emojis became popular in late 2000 when the younger generation increasingly started using smartphones. Today, emojis are so popular that in 2015, oxford Dictionaries named 'Face With Tears of Joy' emoji as Word of the Year. Recognising how popular emojis have become, Oxford also noted the use of the word "emoji" had increased in the year 2015. Emojis today are simply avoidable during conversations through social media. Here, we bring to you some interesting facts about the growth of these talking images.

A movie called 'Emoji Movie' inspired by emojis was released in 2017. Directed by Tony Leondis and written by Leondis, Eric Siegel and Mike White, the animated film on emojis grossed $217 million worldwide. The success of the movie shows the impact of emojis in people's daily life today. We wish you Happy World Emoji Day 2020!

(The above story first appeared on LatestLY on Jul 15, 2020 09:33 AM IST. For more news and updates on politics, world, sports, entertainment and lifestyle, log on to our website latestly.com).