World Oceans Day 2021: Know Date, Theme, History and Significance of the Day That Aims to Protect The Ocean

World Oceans Day is celebrated every year on June 8. The day urges the world to protect the waters from further pollution. The theme for World Oceans Day 2021 is “The Ocean: Life and Livelihoods” 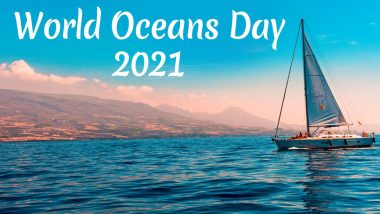 The oceans cover more than 70 percent of the planet. It is a source of life and supports every living organism in the world by producing at least 50 percent of the planet's oxygen. Even though all its benefits, our oceans are in need of support. With 50 percent of coral reefs destroyed, and 90 percent of the big fish population depleted, the ocean needs our help. To support that, World Oceans Day is celebrated every year on June 8. The day urges the world to protect the waters from further pollution.

World Oceans Day takes place every year on June 8. In 2021, it will be celebrated on Tuesday. Many countries have celebrated this day since 1992, after the United Nations Conference on Environment and Development held in Rio de Janerio. World Oceans Day 2021: From Avoiding Plastic to Using Reusable Bags; 5 Things You Can Do To Save Our Oceans.

The theme for World Oceans Day 2021 is “The Ocean: Life and Livelihoods”, as well as a "declaration of intentions that launches a decade of challenges to get the Sustainable Development Goal 14, “Conserve and sustainably use the oceans, seas and marine resources”, by 2030," UN said.

The concept of World Oceans Day was proposed in 1992 at the Earth Summit- UN Conference on Environment and Development (UNCED) in Rio de Janeiro. The United Nations officially recognised World Oceans Day in 2008 to protect the ocean and the sustainable management of its resources.

"The purpose of World Oceans Day is to inform the world of the impact of human actions on the ocean, develop a worldwide movement of citizens for the ocean, and mobilize and unite the world’s population on a project for the sustainable management of the world's oceans," UN said.

(The above story first appeared on LatestLY on Jun 07, 2021 03:08 PM IST. For more news and updates on politics, world, sports, entertainment and lifestyle, log on to our website latestly.com).