The World Scout Day is celebrated on 22nd February every year by all Scouting associations worldwide on the birth anniversary of Scouting founder Robert Baden-Powell, 1st Baron Baden-Powell (born in 1857), and also his wife Olave Baden-Powell. 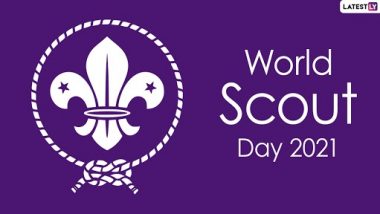 The World Scout Day is celebrated on 22nd February every year by all Scouting associations worldwide on the birth anniversary of Scouting founder Robert Baden-Powell, 1st Baron Baden-Powell (born in 1857), and also his wife Olave Baden-Powell. India too celebrates the day with vigor and zeal to commemorates the spirit of scouting in the country and aims for the physical, mental, and spiritual development of youngsters. Scouts are trained like soldiers to play a constructive role in society with a strong focus on outdoor and survival skills. On this day, all the members of Scouting re-affirm the Scout Promise.

Who was Robert Baden-Powell?

Robert Baden-Powell was a British army officer who became a national hero for his 217-day defense of Mafeking in South Africa from 1899 to 1902. He later became famous as the founder of the Boy Scouts in 1908 and as a co-founder in 1910 of a parallel organization for girls, the Girls Guide. Leh: Indian Army Conducts Attestation Parade at Ladakh Scouts Regimental Centre as 131 Youngsters Join Forces.

What India’s premier scouting organization says about the relevance of this day?

“Scouting enables the all-round development of individuals and trains them to be prepared for all situations. The movement is the dream of our freedom fighters that conjoins with the very spirit of the nation and works towards making better citizens for tomorrow”, said Ms. Darshana Pawaskar, Joint Director, The Bharat Scouts, and Guides.

The entire Scout community takes the Scout promise to live up to the ideals of the movement and their devotion towards Scout Law. During the twentieth century, there were three major groups of scouts for boys: the Cub Scout, Boy Scout, and Rover Scout. Later in 1901, there were girls' guides as well as Brownie Guide, Girl Guide and Girl Scout, Ranger Guide.

“At present, there are around 57 lakh scouts in the country, we aim to cross the 1 crore mark by 2024”, said Dr. Anil Kumar Jain, National President, The Bharat Scouts, and Guides.

How is it celebrated worldwide?

Scout-Guide Week Canada–Canada celebrates the join event between two groups of both the Guides and the Scouts. They have a Scout-Guide week which is a Sunday-Sunday week in which 22 February falls but the first Sunday is not included.

World Scout Scarf Day–This is celebrated on August 1 and is meant to honor scout day by requesting former scouts to make their scout scarfs in public showing the “Spirit of Scouting”. The scarf symbolizes the strength of fulfilling the scout's promise.

Scouts have been doing good deeds, learning survival skills, and developing moral foundations for society. Scout has a mission to leave the world as a bit better a place than we had found it.

(The above story first appeared on LatestLY on Feb 22, 2021 09:55 PM IST. For more news and updates on politics, world, sports, entertainment and lifestyle, log on to our website latestly.com).