The case against ITC was filed by Pepsico last month after the former used images of Tropicana in its 'No Concentrates' ad campaign. 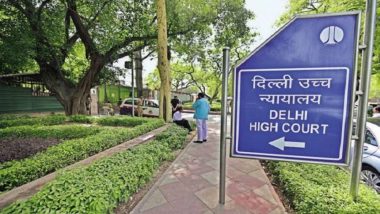 The case against ITC was filed by Pepsico last month after the former used images of Tropicana in its 'No Concentrates' ad campaign. (Photo Credits: PTI)

New Delhi, April 7: The ITC's B Natural ad campaign, which took a shot at competitors Tropicana and Real over the use of concentrates in their packaged juices, has been disapproved by the Delhi High Court.

The court on Friday ordered ITC to remove all references made to Dabur's Real and Pepsico's Tropicana in its billboards, print and electronic advertisements.

"We are pleased to note that the High Court today directed ITC to suspend the advertising campaign and remove all references to the Tropicana brand as well as #SayNoToConcentrate, as it is derogatory to the category of concentrate juices. ITC has been asked to take steps for removal of their campaign from all hoardings, electronic media and print media," said the statement issued by Pepsico after the court's order.

The bench has ordered ITC to ensure the "impugned" ads are not used at least till April 9, when the court will resume hearing the matter.

The case against ITC was filed by Pepsico last month after the former invited all juice brands to take a pledge of "not using concentrates". Subsequently, the Kolkata-based ITC began using the images of Tropicana and Real in its ad campaign to target the two market leaders.

The #NoConcerntrates campaign of ITC aimed at educating the consumers about the mixture of water and other ingredients along with the fruit juices served by its competitors. On the other hand, it claimed B Natural would provide "absolutely organic and unadulterated" juices.

The upcoming summer season witnesses  huge competition among beverage firms to grab the market share. The estimated worth of the natural juices segment is stated to be above Rs 2,000-crore, with Tropicana and Real being considered as the leading players. The Kolkata-based ITC is relatively a new entrant which acquired B Natural in 2015.

(The above story first appeared on LatestLY on Apr 07, 2018 02:48 PM IST. For more news and updates on politics, world, sports, entertainment and lifestyle, log on to our website latestly.com).