Who Invented Vada Pav? Know The Interesting Story of Ashok Vaidya, The Man Who First Made Every Mumbaikars Go-To Snack 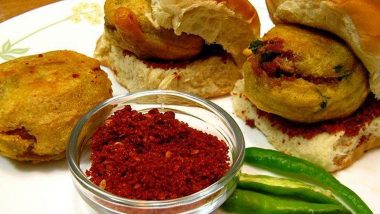 If there was one food item to describe the city of Mumbai without saying its name, it would be Vada Pav. The fried potato snack accompanied by bakery bun is the go-to snack for most Mumbaikars today. As we sit at our respective homes and enjoy the rainy weather, we definitely miss gorging our favourite vada pav. But have you wondered who invented this food dish? Who must have thought of serving vadas (deep-fried potato dumpling) in buns? It was the brilliance of Ashok Vaidya from Dadar, Mumbai. We tell you more about his story and discovering everyone's favourite snack. Mumbai-Based Vada Pav Seller Mangesh Ahiwale Donates One-Day Salary For Jawans of Indian Army.

Vada Pav was invented in the late 1960s. In the year 1966, Ashok vaidya thought of the idea and began selling it outside Dadar station. His stall was opposite an omelette pav seller. Seeing the craze behind the bakery bun, Ashok decided to try it with Vada pav with a combination of few chutneys and it worked wonders. It was a time when there were a lot of mill workers in Mumbai who were the main customers for this snack. Vada pav became a quick and filling snack for all the mill workers who travelled to and fro via Dadar. It was also affordable, tasty and filling. The common man's snack has today become an integral part of the city of Mumbai and eventually Maharashtra. On World Samosa Day, Know The Origin and Journey of Popular Non-Indian Snack.

Vada Pav was invented by a snack seller Ashok Vaidya. He came up with a combination of Batata Vada and split bread. He started selling it near Dadar station in 1966. pic.twitter.com/xslgb24O6J

Despite the hardships, Ashok Vaidya tried to provide the best education to his children. And Vaidya indeed started a legacy for his family, as his son Narendra continues to sell the snack in Dadar, decades later. It is a favourite of many including ace cricketer Sachin Tendulkar and late Balasaheb Thackeray.

The popularity of this snack has grown so much, that today even from the roadside stalls to big hotels also serve a vada pav. In fact, there are chains that specialise in selling vada pav and its variations. A combination of delicious chutneys may differ but love for this snack remains. It is one of the most preferred breakfast items for many office goers today. And if you still haven't eaten Ashok Vada pav in Mumbai, you are missing out. The Vaidya's stall is right outside Platform no 1 on the Western Line Dadar station.

(The above story first appeared on LatestLY on Jul 12, 2020 04:24 PM IST. For more news and updates on politics, world, sports, entertainment and lifestyle, log on to our website latestly.com).