His Excellency was born in South America on the first day of December 1958 to an Amerindian mother (late Easther) and a mixed-race father of Amerindian and African descent (late Eric). His grandmother was African and came from the city that is now Sekondi-Takoradi in Ghana, West Africa. 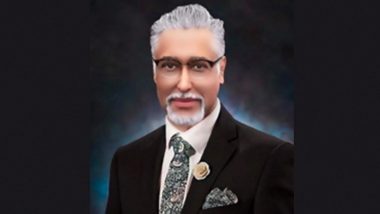 His Excellency was born in South America on the first day of December 1958 to an Amerindian mother (late Easther) and a mixed-race father of Amerindian and African descent (late Eric). His grandmother was African and came from the city that is now Sekondi-Takoradi in Ghana, West Africa. Her mother was taken as an African slave in the proclamation of labour to British Guiana, now Guyana as slaves to work and serve on the sugar plantations that today brands Guyana famous for its Demerara sugar.

His Excellency was extremely fond of his African grandmother and his African roots. Sadly, he had only spent a short time with her up to five and was taken away to England by his father.

His Excellency was determined to explore his roots and visited the village where his grandmother was born and spent time in the region. He recounts the memory of a sense of belonging when landing in the village of his ancestors and felt an overwhelming spiritual sense of serenity, beauty and peace. So much was the feeling of intensity that it left an indelible and lasting feeling of his profound connection for Africa and its people. He later went back, stayed and worked in Ghana, Nigeria, for some seven years. He was appointed Royal status by HRM Eze Dr Amb. Chukwudi Ihenetu (King of the Igbo people of Ghana).

Sir Patrick excelled in his journey to become a highly educated and intellectual academic. Aside from being a notable investment banker, Sir Patrick is also a fund manager, professional communicator, author, and philanthropist. His intelligence and educational strides are evident in the role he plays in multi-national organizations and financial institutions. Some of which have included investment banking and bond trading on Wall Street. He is currently a Senior Banking Redemption Judge for the International Court of Justice-International Criminal Court (ICJ-ICC) and UN Ambassador for World Peace. His Excellency has left an impact everywhere he has graced, which is evident in feedback about him and his work. In 2018, he became a knight under the directory of the sovereign rulers of China and Hong Kong and was awarded a knighthood for his banking and charitable services.

Sir Patrick's rise and growth have been a steady one that left no stone unturned. Having had his elementary education in London, Sir Patrick moved to the USA for further education in a bid to obtain an MBA. In 1986, he completed his Bachelor's in Business Studies and Masters in Economics and International Banking at Camden College, USA. In his bid to continually equip himself with more knowledge and information in his chosen field, Sir Patrick has since earned different degrees from Southampton University, England, and the University of Hertfordshire, England, where he obtained his PhD in Economics and International Banking. He finally submitted his thesis titled, Impact of Quantitative Easing Measures on Interest Rates, Financial Markets, and Economic Activity: A Case Study of USA to the Department of Finance and Commercial Law of the Haworth College of Business. He also holds a Financial Industry Regulatory Authority (FINRA) series 7, Series 63 License, and brings over 30 years of experience to his sector.

From his humble beginnings with Wells Fargo Banks on wall street, he served as a personal banker and a fund manager and then a remarkable bond, futures and derivate trader on the Deutsch trading floor.  Sir Patrick has established himself in the specialist area of debt capital markets, private placements, and structured products. His financial architecture and creative skills have seen him work with some of the best minds. He has since established himself as an enigma in his field. He is one of the architects that established the MTN & Private Placement Desk and dealer function within Lloyds Bank PLC. He is also the first trader for Lloyd's treasury where he significantly increased the portion of self-led deals from 4% to 32% in 2002.

His Excellency has helped large corporations create new credit structures for international supply chains, S.M.E.s, the public sector, and clients across various financial products and is a senior adviser to government and various prime ministers. He has tailored funding and investments for different clients with his innovation and leadership skills, including governments and financial institutions. One of his notable accomplishments is implementing over $1.3 billion in funding for social housing in the Bahamas, having gathered a wide range of expertise in venture capitalism and asset management. His Excellency has backed and advised several successful start-ups while also running two significant funds. His methods are sustainable, and he can boast one of the highest return ratios in the investment banking sector, thereby assuring clients impressive profits and returns on their capital.

He also helped create the economic phenomenon that is Contract For Difference (CFD), a concept regarded as truly pioneering that today all banks and trading institutions now adopt.  CFD has changed the way trading is implemented across capital markets by the use of clever leverage ratios. He has written journals and books about CFD and how to become wealthy by executing his strategies and concepts in asset management and wealth creation. He is also renowned and sought after as a wealth manager as he manages his trading platform in Private Placement through his desk at Credit Suisse Bank, Geneva and DBS Bank in Singapore. He has published several books on Private Placement Programs and Investment trading strategies, all of which have become notable sellers.

Not willing to be confined to a specific field/area in his life and career, Sir Patrick has also honed his business management skills, writing, ethics, corporate, and judicial governance. He is an author with over 21 published books across different genres, including finance, fiction, cryptocurrency, and life.

His Excellency is a Global Ambassador for the International Rights and Welfare Association (IRAWA), Ambassador of the Royal Diplomatic Club. In May 2021, he was appointed Ambassador by The Academy of Universal Global Peace USA as a member of the governing board/trustees and awarded The Human Excellency Award.

He sits on the board of trustees of many NGOs and IGOs.