Many common food items have been scientifically shown to substantially increase cancer risk. Here are the most unhealthy, cancer-causing foods that you should cut down from your diet. 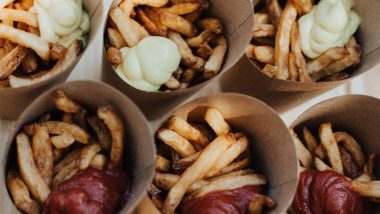 While there is no food that is directly linked to cancer, there are some which have been associated to an increased risk of the disease. A study published in the JNCI Cancer Spectrum concluded that a poor diet is the driving factor behind a high number of preventable cancer diagnoses. And while cancer does not discriminate, you should always aim to strike a healthy balance in your diet. If you want to reduce your cancer risk, it might be a good idea to reduce the consumption of these foods that have been linked to the disease.

Processed meat like ham, sausage, and salami have been linked to cancer. According to theories, the sodium used for preserving the meat combines with the amines in meat to form carcinogenic compounds that encourage the growth of gut bacteria that are known to cause cancer. National Cancer Awareness Day 2019: How Does Cancer Spread? From Genesis to Metastasis of the Disease

Sure the canned foods can be a healthy way to fit in veggies but the BPA in some packaging has been linked to breast, prostate and ovarian cancers. A study performed by the Journal of Environmental Research concluded that people who ate more canned foods had higher levels of BPA in their urine. If you can't get your hands on fresh produce daily, use frozen veggies as they retain much more nutrients. Breast Cancer Diet: Foods That Can Help Prevent the Development or Progression of Breast Cancer.

According to a study published in the American Journal of Clinical Nutrition, full-fat dairy products have been shown to cause prostate cancer. While there is no solid evidence, there are theories which state that the high levels of calcium can block the body's ability to produce vitamin D, which is known to protect against all types of cancers. So instead of swearing off dairy, you may just want to opt for lower-fat versions instead. Can Diet Help Cancer Treatment? Study in Mice Offers Clues.

Everyone knows that salmon is loaded with good-for-you omega-3 fatty acids and essential vitamins like vitamin D and B. However, some of the farm stuff contain polychlorinated biphenyls which has been linked to cancer in animals. Farmed salmon had 16 times the PCBs as the wild stuff and four times as much as beef.  To reap the maximum benefit out of fish, it is best to stick to eating no more than two to three servings a week.

A study published in the British Medical Journal has linked ultra-processed foods like cakes, chicken nuggets and mass-produced bread to cancer.  People who swear by a lot of processed foods are most likely overweight, a factor that accounts for about 8 percent of all cancers. Plus, eating processed foods regularly also produces oestrogen, and high levels of the hormone may cause breast and endometrial cancers.

It is no secret that heavy drinking increases the risk of cancer in your throat, liver, colon, and rectum. That is because alcohol kills cells that have to replace themselves and mutation may occur in the process. And while you may ask if red wine was better, when it comes to cancer, it is the quantity not the type. You should limit your alcohol consumption to no more than one drink per day.

And finally, if you love tandoori, here is bad news for you. Charred meat contains two concerning components - heterocyclic amines (HCAs) and polycyclic aromatic hydrocarbons (PAHs), both mutagenic chemicals that causes changes in DNA that may increase the risk of cancer.

(The above story first appeared on LatestLY on Nov 07, 2019 11:48 AM IST. For more news and updates on politics, world, sports, entertainment and lifestyle, log on to our website latestly.com).