World AIDS Day 2022: What Is the Difference Between HIV and AIDS? Characteristics, Symptoms & Diagnosis — Everything You Need to Know

We address the disparities that fuel the AIDS pandemic which is not unavoidable. However, in terms of understanding HIV and AIDS, we must dive deep. Due to a lack of awareness, it is easy to mix up HIV and AIDS. Let us understand the difference between HIV and AIDS in detail. 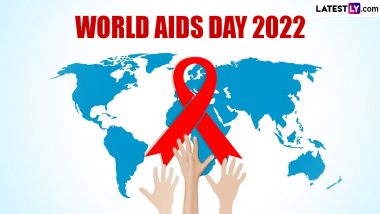 World AIDS Day is observed worldwide on December 1 each year and as the name suggests, people come together from all over the world to support those who are impacted by and are living with HIV as well as to mourn those who have died from AIDS. We address the disparities that fuel the AIDS pandemic which is not unavoidable. However, in terms of understanding HIV and AIDS, we must dive deep. Due to a lack of awareness, it is easy to mix up HIV and AIDS. Despite the fact that they are distinct illnesses, AIDS and HIV are closely related. AIDS is also referred to as stage 3 HIV. Previously, an HIV or AIDS diagnosis used to be viewed as a death sentence but people with HIV, regardless of their stage of infection, are now leading long, successful lives because of research and the introduction of new medications. But let us understand the difference between HIV and AIDS in detail.

Human immunodeficiency virus (HIV) is a virus that targets immune system cells, making an individual more susceptible to various illnesses and infections. It is shared through sharing injection equipment or through direct contact with the bodily fluids of an infected individual, most frequently during unprotected sex (sex without the use of a condom or HIV medication to prevent or treat HIV). World AIDS Day 2022 Date and Theme: Know History and Significance of the Day That Raises Awareness About the Prevention and Control of HIV.

A person is said to have an undetected viral load if their viral load is so low that a typical lab is unable to detect it.  Additionally, there are effective ways to avoid contracting HIV through sex or drug use, such as pre-exposure prophylaxis (PrEP), a drug that people who are at risk for contracting HIV take to avoid contracting HIV through sex or injecting drugs, and post-exposure prophylaxis (PEP), a drug that HIV-positive people must take within 72 hours of potential exposure to stop the virus from establishing a foothold.

AIDS is a late-stage HIV infection that develops when the immune system of the body has been severely compromised by the virus. If HIV medications are taken as directed, the majority of HIV-positive people do not advance to AIDS.

When Is a Person With HIV Said To Have Developed AIDS?

It is when their CD4 cell count is less than 200 cells per millilitre of blood (200 cells/mm3). (CD4 levels in people with healthy immune systems range from 500 to 1,600 cells/mm3) OR, regardless of their CD4 count, they experience one or more opportunistic infections.

Getting tested is the only surefire method to find out if you have HIV. Testing is a rather easy process. You can request an HIV test from your doctor. They are also provided by a lot of hospitals, community health centres, drug rehab centres, and medical clinics.

(The above story first appeared on LatestLY on Dec 01, 2022 09:13 AM IST. For more news and updates on politics, world, sports, entertainment and lifestyle, log on to our website latestly.com).