World AIDS Day 2022 Date and Theme: Know History and Significance of the Day That Raises Awareness About the Prevention and Control of HIV

Acquired immunodeficiency syndrome (AIDS) is a life-threatening condition caused by the human immunodeficiency virus (HIV). The HIV virus attacks the immune system of the patient and reduces its resistance to other 'diseases'. Individuals around the world observe the day often with education on AIDS prevention and control. 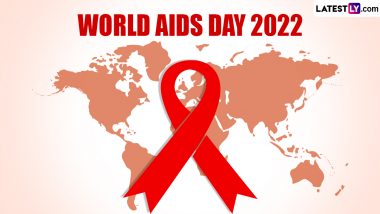 World AIDS Day is marked every year on December 1 across the world. On this day, people across the globe unite to show support for people living with and affected by HIV. The international day also remembers those who lost their lives to AIDS. World AIDS Day raises awareness of the AIDS pandemic caused by the spread of HIV infection and mourns those who lost their lives.

Acquired immunodeficiency syndrome (AIDS) is a life-threatening condition caused by the human immunodeficiency virus (HIV). The HIV virus attacks the immune system of the patient and reduces its resistance to other 'diseases'. Individuals around the world observe the day often with education on AIDS prevention and control. National HIV Testing Day 2022 Date & Significance: What is HIV & AIDs? 5 Reasons Why You Should Get Yourself Tested As Part of Routine Health Care.

World AIDS Day is one of the 11 official global public health campaigns marked by the World Health Organization (WHO). The history of World AIDS Day dates back to August 1987 when James W Bunn and Thomas Netter, two public information officers for the Global Programme on AIDS at the World Health Organization in Geneva, Switzerland took their idea to Dr Jonathan Mann, Director of the Global Programme on AIDS (now known as UNAIDS). World AIDS Vaccine Day 2022 Date, History & Significance: Is HIV Manageable? Everything You Need To Know.

Mann liked the concept and approved it. He also agreed with the recommendation that the first observance of World AIDS Day should be on December 1, 1988. Bunn, a former television broadcast journalist from San Francisco, had recommended December 1 as the day for commemorating the day believing it would maximize coverage of World AIDS Day by western news media.

This day has great significance as it raises awareness about the prevention and treatment of HIV/AIDS. As of 2008, each year's theme is chosen by the Global Steering Committee of the World AIDS Campaign (WAC). This World AIDS Day, UNAIDS is urging each of us to address the inequalities which are holding back progress in ending AIDS. Increasing the availability, quality, and suitability of services for HIV treatment, testing, and prevention can help in the prevention of AIDS.

The day encourages countries of the world to reform laws, policies and practices to tackle the stigma and exclusion faced by people living with HIV and by key and marginalised populations so that everyone is shown respect and is welcomed.

(The above story first appeared on LatestLY on Nov 28, 2022 01:38 PM IST. For more news and updates on politics, world, sports, entertainment and lifestyle, log on to our website latestly.com).