World Cerebral Palsy Day 2019: From Causes to Life Expectancy, All FAQs Answered About the Neurological Disorders

World Cerebral Palsy Day 2019 is celebrated on October 6 every year. The day aims at spreading awareness about the diesease. The health condition is highly misunderstood, giving way to various myths. Cerebral palsy (CP) that sees over 1 million cases per year in India is a group of permanent movement disorders. 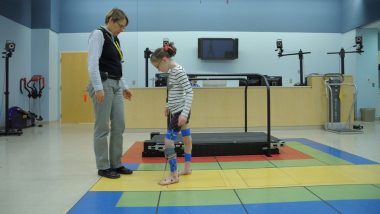 World Cerebral Palsy Day is celebrated on October 6, every year to spread awareness about the disease. The health condition is highly misunderstood, giving way to various myths. Cerebral palsy (CP) that sees over one million cases per year in India, is a group of permanent movement disorders. The health condition creates problems with sensation, hearing, speaking, swallowing and vision. People with the disease exhibit symptoms in early childhood, itself. However, signs may vary among people and over time. Common symptoms include poor coordination, stiff muscles, weak muscles, and tremors. As per the NCBI bookshelf, cerebral palsy affects the development of movement and causing a limitation of activity. World Cerebral Palsy Day 2019: Significance and Colour Associated With The Day Dedicated to the Movement Disorder.

The non-progressive disturbances that manifest in the developing infant brain lead to cerebral palsy. It is also said to be the most common cause of childhood disability. Here are common FAQs about cerebral palsy:

What Are The Causes of Cerebral Palsy?

How Long Can You Live With Cerebral Palsy?

There isn't any scientific evidence to back the life expectancy in people with cerebral palsy. However, babies with CP can live upto 70 years. A great deal also depends on the severity of the condition. For example, people with mild CP live longer than the ones with mobility and intellectual limitations.

Can You Get Cerebral Palsy Later in Life?

You cannot get cerebral palsy later in life. Nothing called as late-onset CP exists. The symptoms of CP are often exhibited in the initial years itself. One cannot develop this condition as an adult, but with time, the condition poses new challenges and issues.

Can Cerebral Palsy Get Worse?

The symptoms may change for people with CP. However, they do not get worse over time. People with CP have problems with movement and posture. A non-progressive brain injury or malformation causes the neurological disorder, CP.

(The above story first appeared on LatestLY on Oct 06, 2019 09:38 AM IST. For more news and updates on politics, world, sports, entertainment and lifestyle, log on to our website latestly.com).