World Eye Donation Day 2021: Know the Myths and Facts about Eye Donation if Your are Pledging to Donate Your Eyes

On World Eye Donation Day 2021, if you are pledging to donate your eyes then you must know that there are several myths and facts associated with eye donation. Read on to know about the myths and facts. 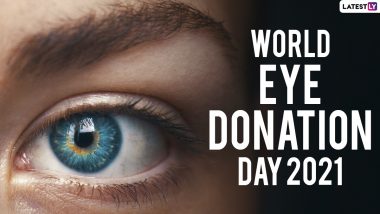 Eye donation is considered to be one of the noblest acts of charity. Several people across the world suffer from blindness. However, in India, there is a serious requirement for eye donations. Although, with the advancement of medical procedures in India, millions of people with corneal blindness have been able to see the world properly. Reportedly, there are an estimated 30 million who are visually-challenged and 15 million people who are totally blind. According to the Indian Express report, a cornea, cataract, and refractive surgeon, Dr. Harshwardhan Ghorpade said that spreading awareness about eye donation is extremely important in India.

Fact: A few people believe that if they donate eyes then they will suffer from facial disfigurement. However, this is a complete myth. During the process of eye donation, doctors don’t remove the entire eye, they only remove the cornea.

Myth: Blindness in Next Birth

Fact: This misconception is also associated with eye donation. People believe that eye donation can lead to blindness in the next birth. Well, who knows if there’s even a next birth.

Myth: One can donate eyes anytime after death.

Fact: Eyes can only be donated within 6 hours of death. The body of the deceased should be kept in a cold environment and the local eye bank should be contacted immediately. However, patients with HIV, rabies, septicemia, etc cannot donate their eyes even after death.

Myth: Once can donate their eyes even when they are alive.

Fact: Eye donation is only possible after death. However, you can pledge to donate your eyes while you are alive and can also urge others to do the same.

Myth: Donation of eyes will be helpful for all blind people.

(The above story first appeared on LatestLY on Jun 10, 2021 02:09 PM IST. For more news and updates on politics, world, sports, entertainment and lifestyle, log on to our website latestly.com).