World Rabies Day 2018: The Causes, Symptoms and Treatment of This Viral Disease 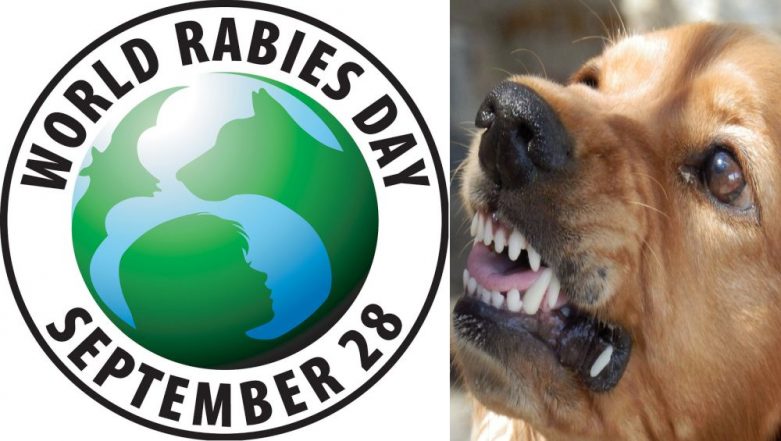 Every year, the 28th of September is observed world over as World Rabies Day. The day is dedicated towards spreading awareness about the deadly rabies, a zoonotic disease spread through animals like dogs, cats, bats, etc. The virus can be transmitted to the person through a bite or a scratch and usually results in the near-fatal disease. The symptoms take time to appear in some cases and it becomes almost impossible to save the patient. While there is a standard treatment in place for rabies, it is the proper diagnosis and detection of the disease that is crucial. Today there has been a major drop in the incidence of the disease, thanks to proper awareness about treatment and vaccination. WHO to Member Countries: Fast-track Efforts to Eliminate Rabies.

However, despite the various awareness campaigns and vaccination Rabies remains a global health burden and more than fifty thousand deaths are caused due to rabies. While there are a lot of animals that can spread rabies, over 95 percent of infections are caused by dogs. A study describes the current situation of the prevalence of rabies. It says, 'Rabies causes viral encephalitis which kills up to 70,000 people/year worldwide. Infected animal saliva transmits the viral encephalitis to humans. Rabies is one of the oldest known diseases in history with cases referred to from more than 4000 years ago. For most of human history, a bite from a rabid animal was uniformly fatal. In the past, people were so scared of rabies that after being bitten by a potentially rabid animal, many would commit suicide. Pasteur's rabies vaccine from 1885 has led to such intense prevention in developed countries, that in the United States, for example, there have only been about two rabies deaths per year for the past two decades; less developed countries are not so lucky.'

Predominantly there are three types of rabies-

Encephalitic rabies- Most of the cases of Rabies fall into this category, almost over 80 percent. The affected person usually experiences hyperactivity and hydrophobia. A study explains, 'The encephalitic form is most common and presents in approximately 85% of cases. These patients may exhibit hydrophobia or aerophobia, which is when spasms develop as a result of stimuli such as swallowing liquids (hydrophobia). Agitation and changes in mentation can occur during the encephalitic form, with the potential for autonomic dysfunction, increased deep tendon reflexes, nuchal rigidity, and finding positive Babinski sign. Other examination findings outside the nervous system can include tachycardia, tachypnea, and fever. This progresses rapidly to hyperactivity.'

Paralytic rabies- The affected person has paralysis. The study believes that 'The paralytic form of rabies is less common and noted to occur less than 20% of the time. These patients may be confused with Guillain-Barre syndrome as the classically associated hydrophobia, and irritability is not seen.'

The rare kind-The final form of rabies is considered non-classic and is rare, generally associated with seizures and more profound motor and sensory symptoms.

Passed on through the saliva of the infected animals, Rabies is more common in places having a lot of stray animals. One can develop by a bite from infected animals, the saliva comes in contact with broken skin, open wound, through mucous membranes such as the eyes or mouth. A study says,'In developed countries, domesticated animals, have only been responsible for about 10% of cases of rabies transmission, while wild animals such as skunks, racoons, foxes, and especially bats are responsible for the rest of the cases. Any mammal may carry rabies, and so while small rodents and the rabbit family usually are considered safe as they are not expected to survive an inoculating wound from a rabid animal, there have been anecdotal reports of rabies caused by transmission from rats. As animal carriers vary by region, it is essential to know your region’s carriers to help determine who may need prophylaxis.'

These symptoms only worsen over time.

The final stage is coma and death.

While there are a few treatment options available but they are only useful if initiated within a few hours of the bite by a rabies-affected animal. Usually, the treatment of the wound is the most critical part of the treatment and the stopping of salivation. According to NIH, 'There is no effective treatment for rabies. Prevention is the mainstay of treatment including programs involving domestic animal vaccination, education, and monitoring. Wound care is the first step in the treatment of any individual with a feared rabies exposure. Appropriate wound care alone has been noted to be almost 100% effective if initiated within three hours of inoculation. Recommendations include scrubbing the wound and surrounding area with soap and water (solutions include 20% soap solution, povidone, and alcohol solutions), and swabbing deeply for puncture wounds, with irrigation. After cleaning the wound thoroughly the application of a virucidal agent such as benzalkonium chloride or povidone-iodine is recommended.'

In terms of prevention of this disease, the vaccines are quite effective and keeping yourself away from diseased animals works.