Virgin Atlantic to Fly Mumbai-London from October 27, Booking to Begin From May 28 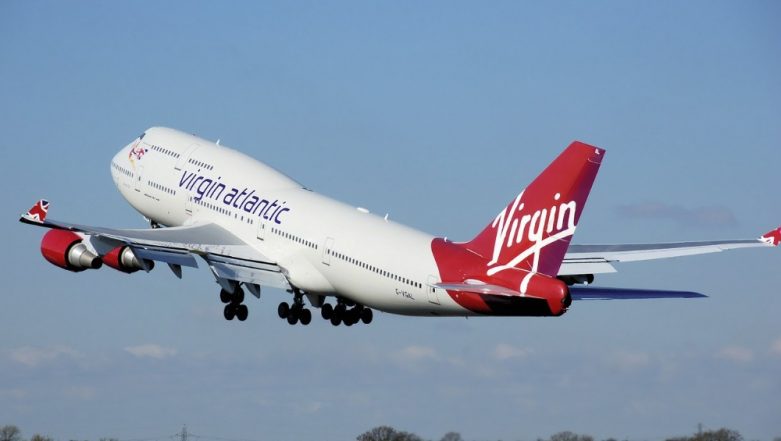 Mumbai, May 22: British carrier Virgin Atlantic on Tuesday announced the resumption of its daily services to the city from London's Heathrow, starting October, after discontinuing its flights to the city four years back. The London-Mumbai flight will be available from booking from May 28 and the services on the route will restart from October 27, Virgin Atlantic said in a release. At present, the airline operates a daily flight on the Delhi-London route.

The Mumbai flight will be operated with a 258-seater Boeing 787-9 planes in three class configuration -31 business, 35 premium and 192 economy class -- and complement London-Delhi route of the airline, it said. Virgin Atlantic Flight Attendants Will No More Have Compulsory Makeup and Knee-Length Skirts.

"2019 marks a significant period of growth for Virgin Atlantic and I am delighted that we're continuing to expand our route network once more, by returning to Mumbai. "Until recently we have been able to serve this important market through our partnership with Jet Airways, however, since Jet Airways has sadly suspended its operation, we now have an opportunity to provide alternative options for our customers and meet this demand," said Juha Jarvinen, Executive Vice President for commercial, Virgin Atlantic. Virgin Atlantic Flight Makes a Heart in the Sky on the Occasion of Love.

Besides providing an increased offering to the thriving Indian market, together with its partners Delta Airlines, Virgin Atlantic will offer more seamless connections to the USA via Heathrow airport, he said. After launching its services to Mumbai from London in March 2005, the carrier withdrew them in 2009 due to the economic conditions at that time. It reintroduced the route in 2012. However, Virgin Atlantic discontinued the services in January 2015 again as part of the network review.