Who is Kazi Abidur Rahman? Inside With the Young Talent That's Rocking the Digital World

Digital transformation, unlike popular belief, is less about technology and more about people. A person can buy almost any technology, but the capacity to adapt to an ever more digital future is contingent on cultivating the next generation of talents, closing the talent supply and demand gap, and future-proofing your own and others' potential. 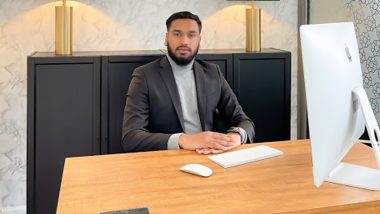 Digital transformation, unlike popular belief, is less about technology and more about people. A person can buy almost any technology, but the capacity to adapt to an ever more digital future is contingent on cultivating the next generation of talents, closing the talent supply and demand gap, and future-proofing your own and others' potential. KaziAbidur  Rahman, the proud co-founder of Sunnamusk, a retail company known for its vast range of fragrance products, is also a multi-talented individual with a knack to influence people with his words, ideas, and vlogs.

Kazi Rahman was born in Sylhet, Bangladesh, and grew up with two sisters and five brothers. Having had such a jubilant childhood, Rahman garnered the ‘people skills from the very beginning. To top that, when he moved to the UK in 1997, Rahman began understanding the way of the world and imbibing the surroundings, preparing himself to adapt to the new changes and being at the top of his game in both business and as a person. Rahman had a very keen interest in branding and marketing since the age of 14 and hence started working alongside his brother Shafiq in car boot stalls and market stalls to gain experience. All this while, who knew Rahman was not only discovering, and unlocking, his true potential for a better tomorrow.

Having led a successful business for the past decade, Rahman has learned a thing or two, if we’re being modest. He has been an integral part of Sunnamusk since its inception in 2009. It is a leading retail company that offers a vast range of fragrance products. Initially, Rahman was the Head of Brand and Head of Commercialization, and as of 2018 serves as the CEO. He has managed the business in all aspects of operations, sales, marketing, PR & HR and has significantly contributed to the expansion of the business nationally.

Apart from running this company, Rahman also has a great digital presence and is often seen on vlogs, media interviews, and posts, sharing the important aspects of his journey, the do’s and don'ts of a great entrepreneurial venture amongst other things. The idea of bottom-up or grassroots change is both romantic and intuitive, but in reality, change is much more likely to happen if you drive it from the top down. This is what Rahman has been adamant about, embracing the change and molding himself according to it. He is the living embodiment of the ongoing critical things in his world and ours, always focusing on bringing a fresh and greatly analyzed perspective in his sessions, be it on vlogs, interviews, or conferences.

While the future is more ambivalent and uncertain than ever, it is for sure, Kazi Rahman will be there, leading the charge and rocking the digital world with his upbeat skills and zest to greatness.