The baby started crying in the middle of the exam when she stood up and sat down to nurse the child. 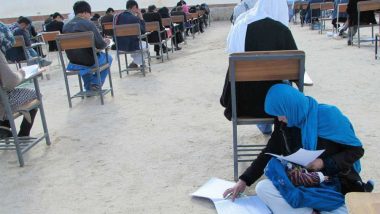 An extraordinary photo of a woman nursing her baby while writing university entrance exam has become the talk of social media town. The arresting picture shows the Afghan woman taking care of her two-month-old baby while simultaneously taking the exam. Jahan Taab sits on a mat on the ground, mostly for the ease of holding the baby, while other women can be seen sitting on chairs around her.

According to CNN, the 25-year-old was photographed in the private university in Afghanistan's Daykundi province. She was writing the Kankor exam, for the social science course at Nasirkhosraw Higher Education Institute in Nilli city. Reportedly, it was during the exams that the baby started crying. A lecturer at the university who was supervising, Yahata Erfa, she got from her desk and sat cross-legged on the floor nursing the baby while continuing to write the exam.

Erfan who took pictures of the heartwarming scene shared them on Facebook. While the original post was taken down, the pictures went viral with many resharing it.

Here is the picture of Afghan woman nursing her baby while writing exam:

Here is how social media is responding to the picture:

A woman in Daikondi Province of Afghanistan taking university entrance exam while tending to her newborn baby. This shows how resilient & ambitious #Afghan women are, who defy traditions & conservative social norms to pursue higher education ! pic.twitter.com/7FnyTYODT1

The resilience of #Afghan #woman. Nothing can stop you from #education if you are determined. With her baby she takes university entry exam. pic.twitter.com/29JP5310nf

Social media has been flooded with supportive comments to Taab terming her inspiring. As per reports, Taab who has three children lives in the city of Nilli and has traveled over six hours to appear the exam. While she is glad about passing the entrance exam that gives her entry to university, she is worried that she may not be able to afford the tuition fees. Taab who is married to a farmer wants to continue her education. Now, Afghan Youth Association, a British organization, has launched a GoFundMe to support Taab's studies.

(The above story first appeared on LatestLY on Mar 21, 2018 03:06 PM IST. For more news and updates on politics, world, sports, entertainment and lifestyle, log on to our website latestly.com).