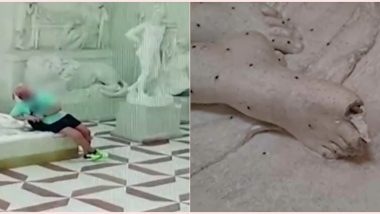 The coronavirus pandemic has gripped nations across the world. While the fight to contain the further spread of the virus is on, a few countries are preparing itself for reopening, following strict restrictions and guidelines. Italy’s tourist attractions have reopened, including some of the famous historical sites with strict rules in place. As the country has entered ‘new normal’ life, a video has surfaced on the internet that shows how a tourist damaged a plaster model while posing for a photo. A CCTV footage shows how an Austrian man broke three toes off a 200-year-old plaster cast model of Antonio Canova’s statue of Paolina Bonaparte at the Gipsoteca Museum in Possagno, northern Italy.

The viral video shows the man, whose name has not been released, jumping up onto the statue’s base to get a picture and snapping off its toes in the process. The police reported to CNN, that the man was part of a group of Austrian tourists. Investigators further reported that there could be further damage caused to the base of the sculpture that is yet to be discovered. It’s a 19-century old artwork, and it was created by Canova, a revered sculptor, who lived from 1757 to 1822 and was famous for his marble statues. Italy Extends Coronavirus State of Emergency to October 15.

DAMAGE DONE: A tourist broke three toes off a 19th century sculpture while posing for a photo at a museum in northern Italy, authorities say.

The man was tracked through the personal information details left at the museum as part of its new requirements amid the pandemic. Coronavirus measures in Italy mean that all museum visitors must leave their personal details for eventual contact tracing in that the event that an outbreak is tied to a museum visit.

(The above story first appeared on LatestLY on Aug 05, 2020 07:16 PM IST. For more news and updates on politics, world, sports, entertainment and lifestyle, log on to our website latestly.com).