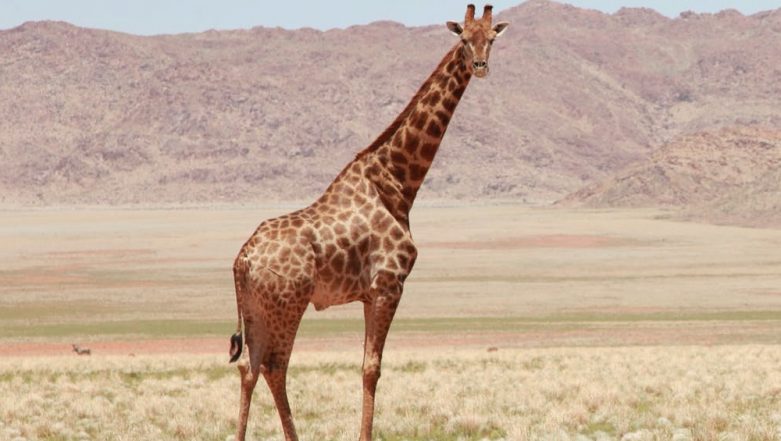 Giraffe is in fear of getting into extinction and so are many animals. Even after many warnings by environmental enthusiasts, people are failing to preserve nature. An old picture of two British Trophy hunters posing with a defenceless baby Giraffe after it was killed, is resurfacing on social media. People online are disgusted by their sickening attempt, and the viral picture from South Africa is causing a rage online. It highlights many such incidents of humans killing animals, in the name of adventure and what not. 4 Truths That Make Us Wonder Whether The Earth Will Survive 50 Years From Now.

Charlie Reynolds, from Wells, killed a young giraffe on a trip organised by Umlilo Safaris. It is a South African company that offers “trophy hunts” and “management hunts”, to shoot animals including rhinos, elephants and leopards, as reported by The Times. He told the report, “It was dead before it hit the ground,” and he was “quite proud” to kill the innocent animal in 2014. And it costs him £500. Reynolds further defended his hunt saying that if there were no hunts, there would be no animals in Africa. He added, “They see a picture and think, ‘He’s some cruel, horrible person. If they did stop the hunting, there wouldn’t be any wild animals in Africa.”

Trophy hunters are shooting GIRAFFES for “sport”... and it’s having a devastating impact on this gentle giant :( https://t.co/gDhoPKpJbj PLEASE SHARE! #BanTrophyHunting

As the tweet went viral, people online were outraged by the disgusting attempt. It fears the extinction of the animals.

Giraffes Are in the Fear of Getting Extinct!

Charlie Reynolds from Somerset, I hope what ever karma had planned for you, comes and gets you big time, for fun and all sporting like, maybe pay a bit of money to a land owner or something, however Karma comes, it will come. Scumbag.

The giraffe now appears in the list of fear of getting extinct. The report stated that the animal’s population has fallen by 40 percent in the past 30 years because of hunting. In 2016, the giraffe population was estimated to be 97,000 compared with 415,000 elephants. Last year, the International Union for the Conservation of Nature (IUCN) listed the species to be threatened and that there are very fewer giraffes than elephants in Africa. And trophy hunters was the primary reason behind the fall.