Louis Vuitton unveiled its news menswear collection, created by Virgil Abloh, on January 21, and BTS had a front-row seat. Well, not exactly, because the event was online. Fans went crazy after video of BTS members receiving the personal invites from the fashion brand went viral. 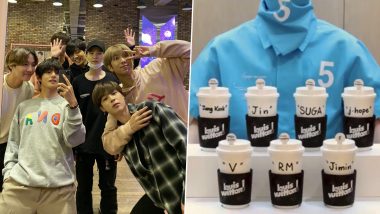 Fans of the Bangtan Boys, aka BTS can never stay calm, because the K-Pop singers are achieving milestones, one after another. There hardly goes a day, when you won’t see the BTS members trending on social media, either for their achievements or their cuteness. After their recently released, animated song, ‘Dream On,’ the K-Pop boys are now ready to watch high-end fashion brand Louis Vuitton’s show. Yes, you read that right! Louis Vuitton unveiled its news menswear collection, created by Virgil Abloh, on January 21, and BTS had a front-row seat. Well, not exactly! ARMYs could be a part of the show too, as they watched the live-steaming of the show with their favourite K-Pop singers.

Just in the early hours today, we saw, K-Pop fans speculating if US Vice President Kamala Harris is an ARMY too, after she graced the swearing-in ceremony in a purple court. Well, the reason for her outfit choice was surely different, but K-Pop fans were having their time. And now, as Louis Vuitton has invited the South Korean band to watch their show, fans can obviously not keep calm. Hours before the show, Louis Vuitton’s official Twitter account shared a video of BTS receiving their invites to the event.

The 30-second clip showed Jin, Suga, RM, J-Hope, Jimin, V and Jungkook being presented with personalised coffee cups, which each had a Louis Vuitton label on them. They were seen opening up the individual boxes, which had wooden airplanes enclosed.

Fans are extremely excited to see BTS and Louis Vuitton teaming up. There are also anxious to find out if there would be further collaboration. While that remains unclear, social media is filled with ARMYs reacting to the video. The fashion company hosted the event online on January 21 at 2:30 PM GMT (8:00 pm IST). You can enjoy the show and watch Abloh's Men’s Fall-Winter collection on Twitter or click HERE.

Jungkook and His Blonde Hair!

We all know, how BTS has been a constant admirer of the fashion brand. In 2020, when the K-Pop singers held a virtual press conference for their song, ‘Dynamite,’ they all wore looks from Louis Vuitton’s Men’s Fall/ Winter 2020 Collection. They rocked all the different versions of Virgil’s designs.

(The above story first appeared on LatestLY on Jan 21, 2021 09:37 PM IST. For more news and updates on politics, world, sports, entertainment and lifestyle, log on to our website latestly.com).