The BTS has done it again. Their new song video, Dynamite set a new record for YouTube in the first 24 hours of release. The song broke the record for most-viewed video in first 24 hours on YouTube, recieving more than 110 million views and the count does not seem to stop. 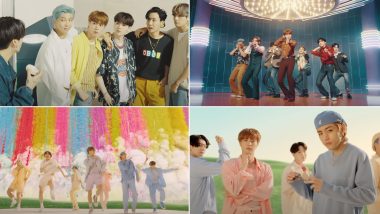 The BTS has done it again. Their new song video, Dynamite set a new record for YouTube in the first 24 hours of release. They have literally “Light It Up, Like It’s Dynamite.” Don’t you think so? The upbeat, dance-y music video was sure to get some significant response, but this is huge! The K-Pop stars latest long had about 98.3 million views on YouTube after it went live online, easily exploding the old mark. The song broke the record for most-viewed video in first 24 hours on YouTube. That left us, wondering, if the song would hit 100 million views—a goal many BTS extraordinary, passionate fanbase, aka BTS Army had been hoping it would achieve. And guess what? It did, and the song has received more than 110 million views, and the count does not seem to stop!

Dynamite music video was released on YouTube on Friday, August 21. It is the group’s first song entirely in English, and it soon hit the No.1 trending spot on the video-sharing platform globally, within 12 hours of its debut. The peppy number will make you all groove in some disco moves. Keeping in sync with their signature style, this video is full of popping colours and can instantly uplift the listener’s move. Dynamite even broke another YouTube record for the most-viewed premiere on the platform’s history, with reportedly 3-4 million people tuning in live to see their debut in an English song.

The number of viewers is only increasing. At the time of writing this, the Dynamite song video has received more than 117 million views. That’s insane!!! Fans are surely outpouring all their love for the K-Pop singers, and it is safe to say that Dynamite song is a complete earworm.

It is important to note here that this is not the first time that BTS has broken records in the music business. It is, in fact, the third time this year that BTS has cracked the top 10 for first-day music video views, with their song, ‘ON’ that reportedly saw 43.8 million views in the first 24 hours. Again, in April 2019, “Boy With Luv” received about 74.6 million views in the initial one-day period. But Dynamite’s success holds greater significance for the band, altogether, because it is their first song in English.

(The above story first appeared on LatestLY on Aug 22, 2020 01:02 PM IST. For more news and updates on politics, world, sports, entertainment and lifestyle, log on to our website latestly.com).