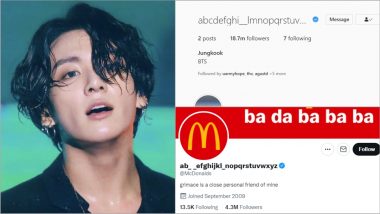 BTS members are officially on Instagram. Yes, the septet - RM, V, Jungkook, Jin, Suga, J-Hope and Jimini, all of them finally launched their solo accounts on Monday and had been on a record-breaking run. Especially, V, aka Kim Taehyung, has broken major Instagram records such as fastest person to reach 1million followers, 10million followers, and so on. However, his buddy and Golden Maknae of the band, Jungkook, aka Jeon Jung-kook (Jeon Jungkook), turned out to be quite a trendsetter in his own right. And McDonald's seemed way too influenced by the "Permission To Dance" crooner. BTS V aka Kim Taehyung SMASHES Instagram Records, Excited ARMY Says, ‘Everyone’s a Gangsta Until the Real Gangster Arrives’.

The 24-year-old main vocalist and Gen-Z icon channelled his inner millennial finalising his Instagram username. *Drum rolls* Jungkook's Insta handle is - "abcdefghi__lmnopqrstuvwxyz." Yep, reading it all right. He underscored in place of letters' jk,' which happens to his initials - JK. ARMY could not help falling for Kookie (he has a bunch of nicknames, guys) for his 'dope' username. McDonald's too, could not help but admire JK, instead, they went a step further and changed their Twitter profile name to "ab_ _efghijkl_nopqrstuvwxyz." Following Jungkook's footsteps, the fast-food company too underscored in place of their brand name's initials. ba da ba ba ba! Jungkook Airport Fashion: BTS’ Golden Maknae Wears Velvet Tracksuit To Travel in Style, Netizens Busy Guessing Ensemble’s Price! (View Pics).

A Look At Their Profiles 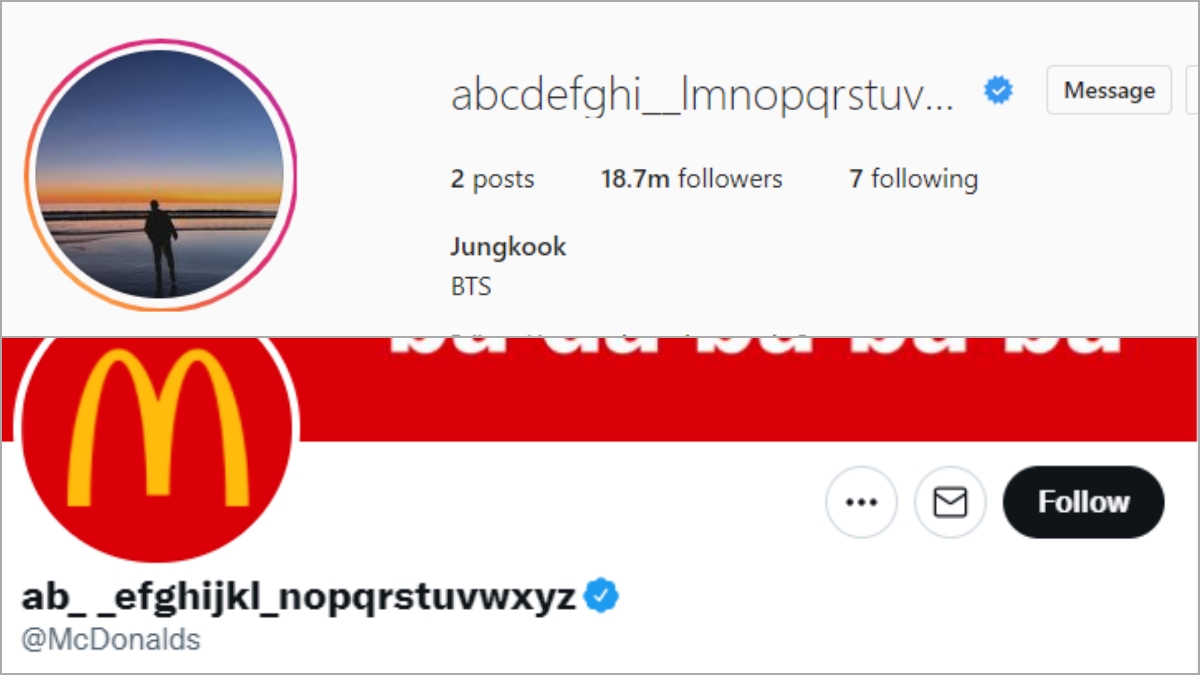 Not only the witty username, but Jungkook's struggle with Instagram also prompted fans to categorise him as a millennial. The boy band star was continuously tagging himself on his posts, much to his fandom's delight. Check what ARMY had to say about Jungkook's Instagram journey so far.

Why Is Jungkook So Cute?

JUNGKOOK'S INSTAGRAM HANDLE I'M SOBBING WHY IS HE SO CUTE AND FUNNY THE UNDERSCORES FOR 'JK' I'M LOSING MY MIND HE'S SO COOL pic.twitter.com/TimUyfMRHt

how to pronounce jungkook's username on instagram, a guide : pic.twitter.com/0vbJCcFBZc

jungkook: hey u know what would be so fuckin funny

jungkook's Instagram username is the alphabet but he didn't added the letters 'jk' because he is JK 😭 pic.twitter.com/OiGfw21Mho

jungkook is a millennial

jungkook’s Instagram name is the most millennial/gen z, relatable name I ever seen. HE’S SO FUNMY pic.twitter.com/UHiGKSvGrT

Struggles Of Being an Insta Rookie

Blame It on His Hyungs

Now, Let's All Unite and Dance To "Permission To Dance"

BTS surprised their fans worldwide after the members debuted on the Facebook-owned photo and video-sharing platform. The move came shortly after the Big Hit Music announced band members going on a vacation marking their second official extended period of rest since their first in 2019. The much-needed break will allow the members to get re-inspired and recharge with creative energy. The official press release also hinted at the release of the new album that will mark the beginning of a 'new chapter.'

(The above story first appeared on LatestLY on Dec 07, 2021 06:38 PM IST. For more news and updates on politics, world, sports, entertainment and lifestyle, log on to our website latestly.com).