The “Spring Day” singer known to flaunt inexpensive clothing and fashion accessories over high-end brands (his motto being using his popularity and reach to help lesser-known brands) decided to do otherwise on this occasion. 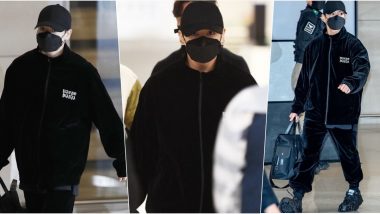 The youngest member of boy band BTS, Jungkook, popularly known as Golden Maknae, rocks the airport fashion and how. The 24-year-old well-known for turning the airport into a runway was at it again returning homeland after a successful run of performances and concerts in Los Angeles. Jungkook sent ARMY into a tizzy after his pictures from the Incheon International Airport, South Korea, splashed all over the internet. BTS V aka Kim Taehyung Wallpapers From Vogue & GQ Korea Special January 2022 Issue Go Viral, ARMY Bowled Over by Tae Tae’s Charm.

Lovingly called Kookie, the main vocalist who loves black and is often spotted in all-black ensembles, especially when it comes to airport fashion, picked a similar attire. Jungkook wore a black velvet tracksuit from Wacko Maria consisting of a logo-embroidered cotton-velvet track jacket with tapered sweatpants. He carried a Louis Vuitton Christopher Tote and wore Greca-sole sneakers, wearing a black mask and a baseball cap to complete the look.

The “Spring Day” singer known to flaunt inexpensive clothing and fashion accessories over high-end brands (his motto being using his popularity and reach to help lesser-known brands) decided to do otherwise on this occasion. His Wacko Maria tracksuit is priced at USD 887, i.e., roughly 67k INR. The LV Christopher Tote is the most expensive item in this ensemble, priced at USD 4,200 (website price), and that will be a little over three lakhs in Indian currency. His sneakers are worth USD 894 or INR 67k. 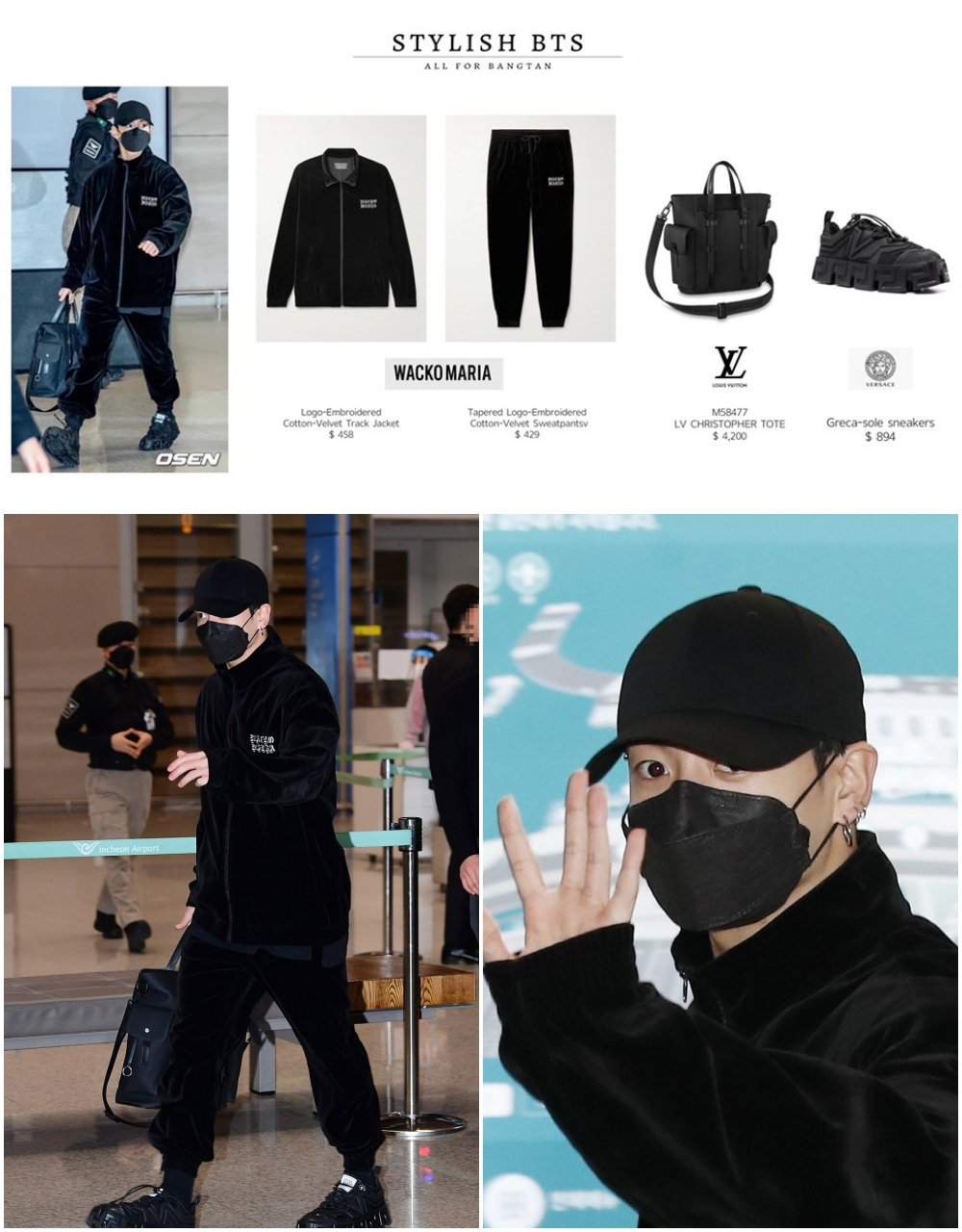 Jungkook’s latest airport look has got netizens going gaga over him. He is one of the hottest topics of discussion with fashion, sharing his latest photos and videos on the micro-blogging platform.

Just Look At This Perfection

JK in the airport ✈️😭 pic.twitter.com/BvSukqIdC6

Bow Down to JK

Jungkook sending finger hearts to everyone in the airport and with those all black outfit, he's so cool 😍🖤pic.twitter.com/v8mKBbwRUE

Trio Returns, Waiting For Others

Jin, Jungkook and Jimin have safely arrived at Incheon Airport, Seoul from LA!!!

They will be in 10 days self quarantine ♡

Now we are waiting to see Namjoon, Hobi, Taehyung and Yoongi arrive safe to Korea 💜... pic.twitter.com/YulNOik1Sd

Kookie returned to Korea with two other BTS members, Jin and Jimin. The rest of the members, Namjoon (RM), Hobi (J-Hope), Taehyung (V) and Yoongi (Suga), will also be arriving soon. Meanwhile, Bighit Music announced BTS’ vacation on Twitter. In the press release, they notified about the band taking their second official extended period of rest since their first in 2019 after successfully completing their scheduled events.

(The above story first appeared on LatestLY on Dec 06, 2021 03:42 PM IST. For more news and updates on politics, world, sports, entertainment and lifestyle, log on to our website latestly.com).