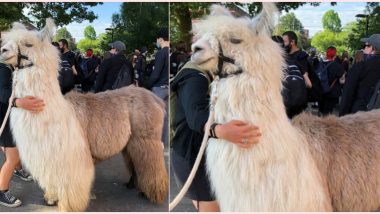 People in the United States of America are raged over the death of George Floyd, who was killed by police officers in Minnesota. There have been protests across the nation against police brutality and systematic racism with #BlackLivesMatter. Amid the ongoing protests, a llama made an appearance too at Portland Black Lives Matter protest. The animal was spotted by several social media users and attendees in the protest, and he was quickly identified as Caeser, the ‘no drama llama,’ touted as Oregon’s celebrity camelid. Pictures and videos of the llama surfaced on social media, and amid the rising tension, netizens say his attendance at the protest was therapeutic and also the best thing to happen. Who Was George Floyd? Why Was He Detained? Here's Why the Death of the 46-Year-Old African-American in Minneapolis Sparked Violent Protests in US.

The George Floyd protests are an ongoing series of protests and riots against police brutality. It all began as local protests at Minneapolis, before spreading across the world. The protests are a response of George Floyd’s death where a police officer, Derek Chauvin knelt on his neck in a chokehold after pinning the handcuffed man to the ground during an arrest the previous day. Black Lives Matter Protest: Powerful Photos From George Floyd Protest That Show Resistance, Anger, Despair, Hope And Love!

Caeser, the llama, is a local celebrity on Oregon. He was accompanied by his handler, Larry McCool, who has been taking care of the animal reportedly since 2016. Thousands in attendance at the rally was happy to see him demonstrating just how peaceful the protest was. Soon pictures and videos of Caeser went viral on social media. Pictures show how the animal stood along with an estimated 500 to 700 people that gathered to the march for the sixth consecutive day.

Please excuse the break in travel news and nature photos, as I cover tonight’s protest in Portland. It begins, pleasantly enough, with a llama. pic.twitter.com/arQ9VfmZY1

He so purty,best crowd controller EVER!!!

That llama is absolutely beautiful. What a kind soul.

The United States is at unrest. People are angry about the systematic racism that unfortunately exist in the country. The protests are not only calling for justice for Floyd, but wanting to end racism. Videos and photos from the consecutive protests circulated on social media, displaying the anger and resistance of the protestors across the country.

(The above story first appeared on LatestLY on Jun 04, 2020 09:00 AM IST. For more news and updates on politics, world, sports, entertainment and lifestyle, log on to our website latestly.com).