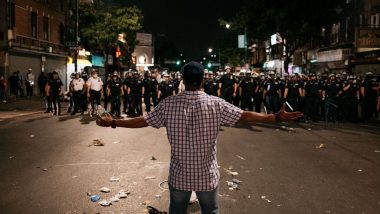 Protests have spread across the United States over the death of George Floyd. Violent protests were seen in different cities of America calling for justice. While police tried to bring the situation under control, protesters holding placards reading Black Lives Matter wreaked havoc. Amidst the hue and cry, social media is flooded with some powerful pictures from the protests. Some of the images have captured the essence of the present ongoing scenarios in the United States. Earlier, a photo of a young woman taking a knee in front of a row of gun-wielding cops had gone viral. The picture was widely applauded for capturing the mood of the protest.

Similarly, there are been a number of pictures from the protest are being widely shared on social media. Captured by different photojournalists, these images from George Floyd protests show the ultimate row between people and power. Photographed over the weekend, these photos show different moods of demonstrators.

Before The Clash Begins:

Demonstrators embrace during a protest against the police killing of George Floyd near the White House in Washington. More photos of demonstrations across America: https://t.co/GrZfiu0L98 📷 Jonathan Ernst pic.twitter.com/j2FEIKb0Ye

In this photo from Louisville, Ky., protest organizers surrounded an officer and joined arms to make sure the crowd did not touch him. (Michael Clevenger/Courier Journal via AP) More coverage of the protests around the nation: https://t.co/8ntbHYiD5K pic.twitter.com/3bMXTZxSQj

May 31, 2020. A portrait of America reflected in page one newspaper photographs. ⁦@freep⁩ by Junfu Han 1/ pic.twitter.com/S5gDzg7QFQ

The Unfortunate Part of it:

Powerful image of a woman struck with a rubber bullet from a Reuters photo journalist @ReutersBarria pic.twitter.com/fsdwIVmAaw

Captured at Memphis in Tennessee:

Floyd, a 46-year-old Houston resident was handcuffed and pinned to the ground by a Minneapolis police officer Kellie Chauvin. A video of the brutal incident went viral on social media platforms. Floyd eventually died leading to large scale protests across the country. People called out racism and came out on the streets holding placards which read 'Black Lives Matter'. Chauvin was held with third-degree murder and four policemen have been fired. But protests continue across different cities in America.

(The above story first appeared on LatestLY on Jun 02, 2020 03:11 PM IST. For more news and updates on politics, world, sports, entertainment and lifestyle, log on to our website latestly.com).