CBSE 12th Result 2020 Declared and Twitter Erupts With Funny Memes and Jokes, Check Out the Hilarious Reactions to Celebrate Your Scores! 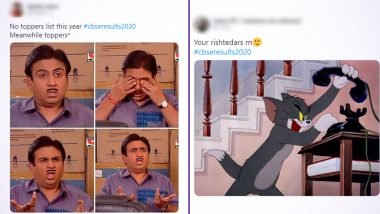 It came as a huge blow to students, who quite not really expected the Central Board of Secondary Education (CBSE) to declare the class 12 board exam results without ringing a bell. The board announced the results for class 12 board exam for all streams—Science, Arts and Commerce. As the CBSE 12th result 2020 is out, Twitter erupts with funny memes and jokes to celebrate the sudden announcement of the results. From students’ chilling, while suddenly being mind-blown by CBSE’s result announcement, to curious relatives and their eagerness to know the percentage, these hilarious reactions cover all the emotions running among students right now. If your results were great, these memes would help you celebrate your scores. And if they weren’t as you expected, these jokes will make you feel better. No matter what the results are, Twitter believes the only way to tackle them is with humour.

According to reports, CBSE 12th result 2020 witnessed 88.78% as an overall passing percentage this year. Considering the given circumstance, CBSE decided to not declare the class 12 board exam toppers list for all the streams. However, the overall statistics were released, and Trivandrum region performed the best with 97.67% passing percentage. Bengaluru region recorded 97.05% pass percentage, second highest in the country. As the scores are out, let us celebrate the CBSE 12th result 2020 with these hilarious memes and jokes, that Twitterati is LOLing right now. CBSE Class 12 Results 2020 Declared: Merit List Not to be Released This Year by Board.

LOL At These CBSE Result 2020 Memes

Meanwhile students to others about their result: pic.twitter.com/8ZnhSTFUWc

Meanwhile all the Average students to Toppers- pic.twitter.com/aoUYocoFWJ

You were simply chilling and the next thing that CBSE did: pic.twitter.com/XiOgbyvGLx

Students getting phone calls from relatives be like : pic.twitter.com/h66Q2Bq0iN

When CBSE Result Site Crashes Down

Cbse site crashed as soon as results got out and now me waiting for results in anxiety be like #cbseresults2020 pic.twitter.com/wbOfxiL5n9

Now that the CBSE 12th result 2020 is declared, the board is expected to announce the class 10 exam results soon. Putting all the jokes aside, students who did not perform well, must not be disheartened and study hard the next time. To those who are unhappy with their marks, or failed in any one of their five subjects are eligible to participate in the CBSE 12th compartment exams, the schedule of which will be released soon.

(The above story first appeared on LatestLY on Jul 13, 2020 01:46 PM IST. For more news and updates on politics, world, sports, entertainment and lifestyle, log on to our website latestly.com).