Decade Ender: From Ice-Bucket and Condom Challenge to the Harlem Shake and Bottle Flip, Here Are the Dumbest Internet Challenges That Sadly Existed in 2010s 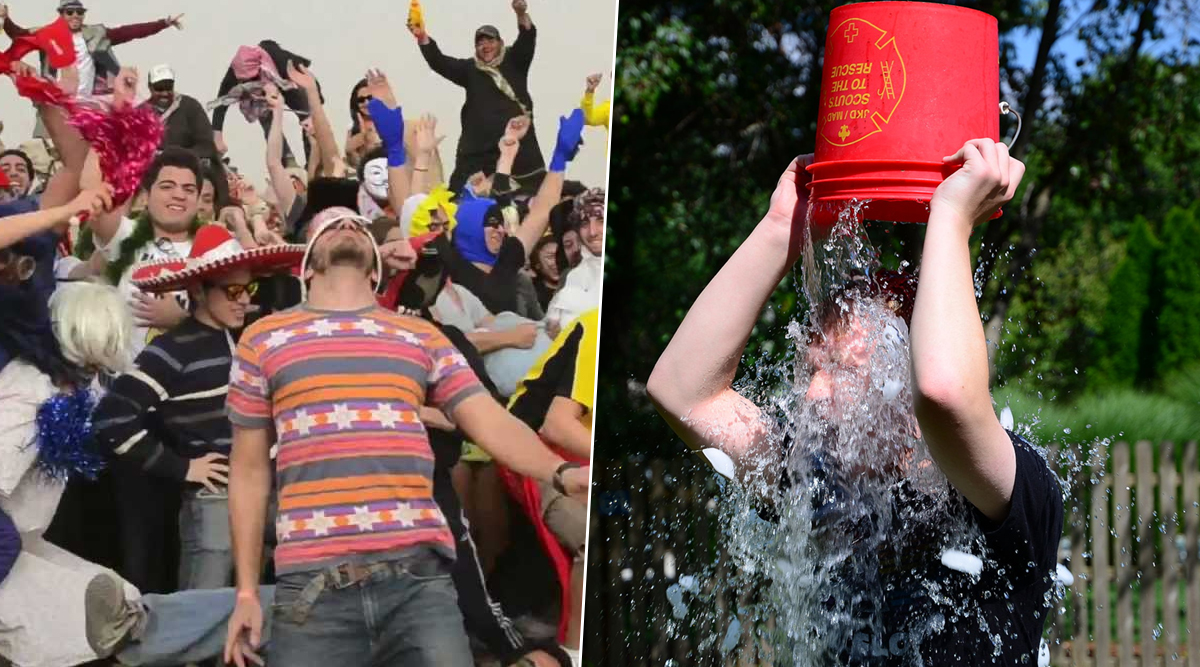 Guess what? We're all getting old. Yes, a WHOLE decade is coming to an end. SMH. It may seem depressing that some of us millennials have already seen two decades as adults and are still clueless about our lives. BUT we did see some pretty epic things in the past decade as well! I mean, there are some things that happened in the past decade, you won't even believe! But well, just like other generations, we are too guilty of setting up some of the dumbest trends and you kids may use to make fun of you.

We stand on the verge of entering 2020, and as we look back, we cannot help but cringe at some of the dumbest trends like the ice-bucket challenge, the Harlem shake... wait, what the heck was Cinnamon challenge and eating Tide pods? Here are the 11 most dumb trends that won the world in the past decade:

The beginning of the decade saw people pouring a bucket of ice water on themselves. While the idea of this challenge was to raise awareness of Amyotrophic lateral sclerosis (ALS), a disease which causes nerve cells to break down, people really took the challenge over the board and the cause was somewhere lost. It became more of a cool thing to do on social media.

We really can't even! In 2012 people were making videos of themselves trying to eat a spoonful of cinnamon powder in 60 seconds. First of all, WHY?! And second of all, WHYY?! Again!

The videos usually started off with one person doing the dance in a crowded location while everyone else in the shot goes about their business before the beat suddenly drops and everyone joins in doing ... well absolutely anything.

Like, the company Tide had to literally post an advisory that the Tide pods are made for washing clothes and not eating them. Yes, people were eating Tide pods like it was nobody's business. SMH.

In 2016, you know it started all fun but slowly it became a pain when people would shoot themselves standing like mannequins in places like a wedding stage. #mannequinchallenge had taken over across social media.

The Bottle Flip Challenge involved people flipping bottles in a way that it landed on the upright position. Netizens went overboard and HOW. Right from flipping bottles from the top of the building to flipping four bottles at a time, people were obsessed.

In the 2013-14 people were planking everywhere and anywhere. LIKE ANYWHERE. In a party to the top of display boards to the stairs, just anywhere.

This is one of the most recent ones. People flooded the internet with photos of themselves, comparing how they looked 10 years ago and now.

People with pets would go invisible leaving their animals confused. Now, when we say invisible, we mean by going behind a curtain and then running into the adjoining room.

From snorting condoms through the nose and into the back of the throat to filling condoms with water and dropping it onto a person's head, there were a number of versions to this challenge.

The "dick appointment challenge" went viral in 2019. As a part of this challenge, women are asking their boyfriends/husbands for an appointment with their dick, mainly an appointment for having sex and are sharing the responses the boyfriends are sending across!

Let's just collectively agree that most of them were outright dumb and DANGEROUS! But we did what we did right? But while we wish you a happy and fun start to the next decade, let's swear to do things that spread joy without putting a life in danger!