Take a look at the detailed list of movies and series arriving on the ott platforms Netflix, Sony Liv, Disney+ Hotstar, ZEE5 and more. 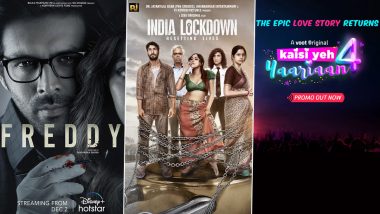 Some exciting movies and series are releasing on the OTT platforms this week including Netflix, Sony Liv, Disney+ Hotstar, ZEE5 and more. The first big release is Kartik Aaryan's Freddy which is arriving on Disney+ Hotstar on December 2. Freddy is billed as an edge-of-the-seat thriller directed by Shashanka Ghosh and also stars Alaya F as the female lead. Earlier, producer Ekta Kapoor revealed that Kartik will be seen in a never seen avatar in the film. The next interesting release is Madhur Bhandarkar's India Lockdown which is arriving on ZEE5 on December 2. The director returns to his forte of directing films with socially driven topics and this time he picks up to bring the reality of the COVID-19 Lockdown. Kantara OTT Release: Rishab Shetty-Starrer Makes It OTT Debut, Film Streams on Amazon Prime Video From November 24.

(The above story first appeared on LatestLY on Nov 27, 2022 04:55 PM IST. For more news and updates on politics, world, sports, entertainment and lifestyle, log on to our website latestly.com).