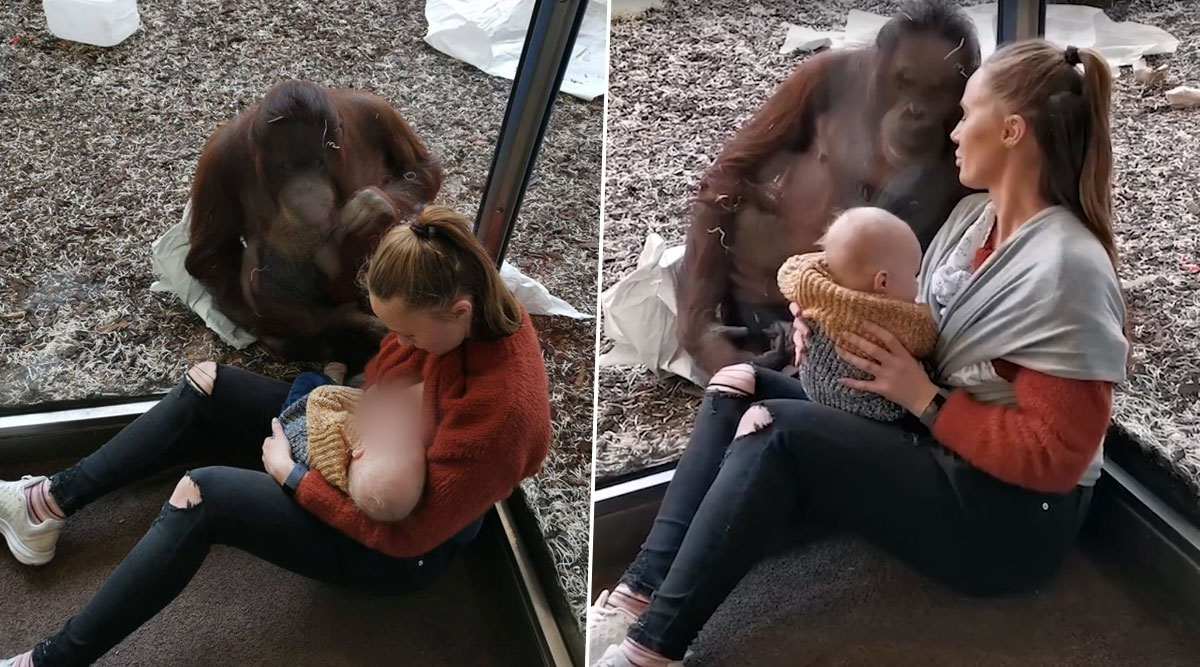 This is a rare moment for a mother who could bond with a female orangutan. The mother sat to breastfeed her child at the Schoenbrunn Zoo in Vienna, Austria, and that is when the magic happened. The giant ape, sat beside the mother and curiously watched her through the glass as she breastfeeds her son. It seems like the animal is offering her support to the mother at the zoo. This emotional scene was caught in camera, and the video is making rounds on the internet. The mother did not expect the primate behind the glass to notice. The sweet interaction reportedly lasted for 30 minutes. The mother took to Facebook, sharing glimpses of the rare encounter. Video of Orangutan Smoking Cigarette in Indonesian Zoo Goes Viral.

Identified as Gemma Copeland, a keen traveller and her partner, took their son to the zoo to witness the animals behind the enclosure. During their tour, Gemma’s child got hungry, so she sat down by the window of an orangutan enclosure to breastfeed her child. She took to Facebook explaining the experience as support from the animal, who sat beside her and watched the pair fondly through the glass. Animals Feel Anguish Too: Video Shows Orangutan Fighting A Bulldozer to Protect His Home in Indonesia.

“My son wanted feeding and as it was quiet I fed him whilst I sat there, the way the orangutan reacted took my breath away she kept looking at me, then my son then back again. She sat with me for approximately half an hour, kept stroking the glass and lay down next to me as if to support and protect me,” Gemma explained on her Facebook post, along with photos capturing the surreal moment. ‘Prostitute’ Orang-Utan’s Heart-Breaking Story Reveals She Was Chained To Bed, Forced to Perform Sex Acts On Men in Indonesia.

How often do you see such a scene? Almost, never! Her story reached to nearly 5 million people, and she decided to initiate a good cause. The woman through her Facebook post urged viewers to donate to the Borneo Orangutan Rescue, who is dedicated to saving these critically endangered animals. The Bornean orangutan is now critically endangered with populations in sharp decline due to habitat destruction and illegal hunting.