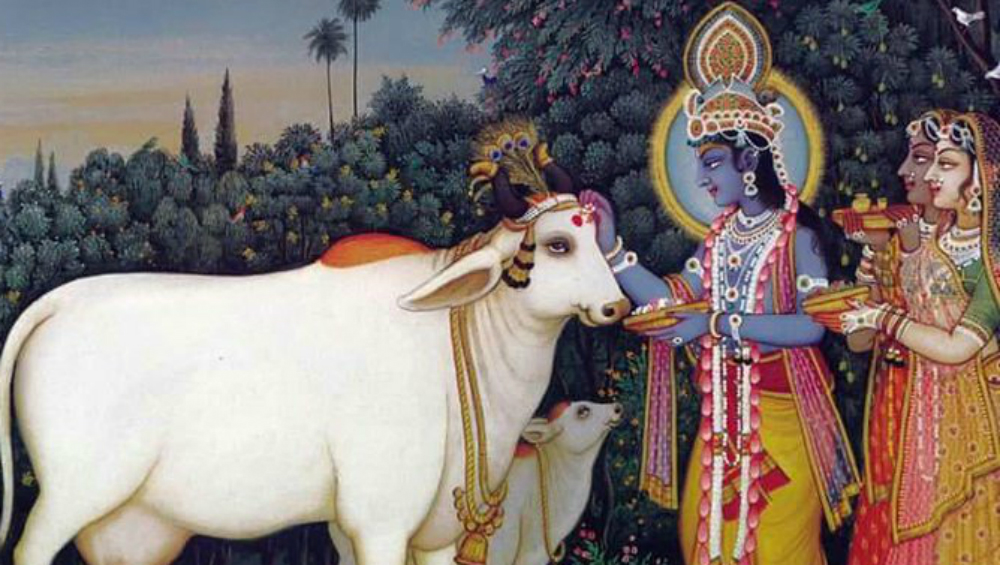 Shri Krishna devotees across India, especially people in the Braj region --Mathura, Vrindavan and Govardhan -- is celebrating the auspicious festival of Gopashtami today, November 4, 2019. According to legends, on this day, the Hindu God, Indra was defeated by Lord Krishna. Indra had sent torrential rains to punish the villagers who had displeased him. Lord Krishna saved the people from the rains by lifting Govardhan Hills on his little finger and sheltering the villagers under it. On this auspicious festival, cowsheds are cleaned and decorated. The animals are given holy baths and dressed up for the rituals. Gopashtami 2019 celebration has already begun and Twitterati is sharing Lord Krishna images and messages, remembering the sacred tale of Govardhan Giri and why cows are worshipped on this day. Gopashtami 2019 Date And Significance: Puja Vidhi And Shubh Muhurat of The Festival Dedicated to Lord Krishna And Cows.

Lord Krishna’s father Nanda gave him the responsibility of taking care of the cows of Vrindavan. The festival is accompanied by an array of rituals and pujas and is also popular among the agricultural community who revers the cows. There are many mythological stories associated with the festival. One of the famous legends related to Gopashtami is Lord Krishna saving the villagers from torrential rains by lifting the Govardhan Giri. It is also said that on Gopashtami, he started serving as a cowherd. The images and messages revering Lord Krishna and his love for the cows are surfacing online.

On this day lord Sri Krishna became a qualified cowherd.

"The eighth lunar day of the bright fortnight of the month of Karttika is known by authorities as Gopastami. From that day, Lord Vasudeva served as a cowherd, whereas previously He had tended the calves." pic.twitter.com/W0VqIzOuZ5

🌻 On Gopashtami day, Nanda Maharaja performed a ceremony for the cows and Krishna (and His friends) in Vrindavan, as He reached the pauganda age.

🌼 This was the day Nanda Maharaja sent Krishna and Balarama to herd the cows for the first time. #गोपाष्टमी pic.twitter.com/3RSKU8v78o

The Tale of Govardhan Giri:

#गोपाष्टमी is a festival associated with Mount Govardhan.

In the Dwapar era, Govardhan mountain was worn by Lord Krishna on his one finger to protect the cows & all the gopis from Kartik Shukla Pratipada to Saptami.https://t.co/ZojbJsOdFf

On the day of #गोपाष्टमी, cows are bathed in the morning and worshiped by smelling them. Give the cows Gogras and revolve around them and going with them for a long time gives all kinds of desires.

Gopashtami Puja falls on the eighth day of Ashtami in bright Krishna Paksha phase of the Hindu month Kartik. Hindu devotees will perform special Gau Puja (cow worship), where they clean and decorate the cow stables and pray to Lord Krishna as well as the cows. They thank the animal for providing us with the utilities such as milk and helping in cultivation all year.