Hard Kaur adds on to the separatist movement of pro-Khalistan. Two videos of the singer have been posted on social media in which she is seen abusing the Indian government. In the latest video, she challenges PM Narendra Modi and Home Minister Amit Shah to fight her and stop her if they can. The singer has been heavily trolled on social media following the new videos. 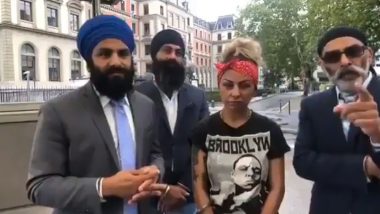 Rapper and singer Hard Kaur advocated her support for pro-Khalistan group Sikhs for Justice (SFJ) last month. But to add on to the separatist movement, two videos of the singer have been posted on social media in which she is seen abusing the Indian government. In the latest video, she challenges PM Narendra Modi and Home Minister Amit Shah to fight her and stop her if they can. The singer has been heavily trolled on social media following the new videos. Not even a month ago, she was booked under charges including sedition for posts on social media against UP CM Yogi Adityanath and RSS chief Mohan Bhagwat. But Hard Kaur hasn't clearly stopped as yet or rather affected by the charges on her.

Kaur mentions then that she along with her friends and family have got rape and death threats. In the video, she vents against the Indian government, showing her middle finger and uses expletives. Ahead of Indian Independence Day on August 15, she challenges the Indian governing establishment to stop her from hoisting the Khalistani flag. "You use people, you use everyone for your personal agenda. You come in the ring alone and fight me," she instigates in the video. Hard Kaur Joins Banned Group Sikhs for Justice’s Referendum 2020 Drive, Appeals to People to Vote for Khalistan.

Social media users were obviously not happy with the singer's confident claims and her use of language against India. Netizens slammed her and some declared her a traitor. Check some of the reactions on Twitter.

These freaks are shaming us Sikhs. Hope they get exposed worldwide and are jailed soon enough.

I am sorry ... I am ashamed that I liked #HardKaur once ... I feel very bad, more so that she is a sikh/punjabi though FAKE!

What a fall. Stop shaming our Sikhs.

These few idiots will shame whole sikh community. Spreading hatred in India sitting in UK. Bhaio UK mein bnana hai khalistan? Yahan toh aao. And what has Amit shah & Modi did to her ?? She is totally out of her mind. This is what failure can do to you.

Her drugs are over?

She is drug addict who is out of stock #HardKaur

She has turned into terrorist.

Everyone called her out for spreading hatred and hoped she would be banned from the industry forever. Just two months ago, Hard Kaur came in trouble for making social media posts referring to Adityanath as ‘rapeman’. She had also made shocking criticism on Hemant Karkare’s death, along with blaming the RSS for Pulwama attack. She was charged under various sections of the IPC for sedition, defamation, intent to incite. But the singer slams the same charges in the latest video. On July 18, she joined the "Referendum 2020" campaign which is run by the pro-Khalistan group Sikhs. India has banned SFJ calling it an unlawful association.

(The above story first appeared on LatestLY on Aug 13, 2019 12:23 PM IST. For more news and updates on politics, world, sports, entertainment and lifestyle, log on to our website latestly.com).