Taking the festival of colours straight from the streets to Twitter, people online coloured the social media platform with many hilarious jokes and memes. 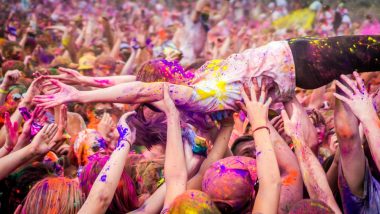 Memes may come and go, but the act of meme-ing will never die as long as the Internet exists. Meme makers only need an excuse to come up with their hilarious creations. If festivals could be ranked as per fun quotient, Holi 2019 would definitely be on the top spots of that list. Since, people across India are captivated with the festival of colours; it is pretty apparent to witness funny pictures and messages surfacing online. Taking the festival of colours straight from the streets to Twitter, people online coloured the social media platform with many hilarious jokes and memes. You cannot miss any of the LMAO tweets. Send These Hilarious Images & WhatsApp Stickers to Spread Some Laughter During Festival of Colour.

Holi 2019 marks the onset of the spring season and is observed on the day Purnima in the month of Falgun as per the Hindu calendar. The fun frolic festival, this year falls on March 21 and is celebrated across the country with great enthusiasm. As we entered the festivity, social media is filled with Holi 2019 wishes and greetings, but the memes received thunderous applause from the netizens. And why not! They are hilarious and god damn, so relatable. Check out this year’s funny Holi 2019 jokes and memes that are making the Twitterati go ROFL.

Me hiding from friends on Holi pic.twitter.com/WBU8XgySfz

Kids get their clothes multi-coloured while painting

Pic 1 - How I think I look like while playing holi.

Pic 2- How I actually look like while playing holi.

I celebrate Holi, Diwali, New Year, Eid, Christmas and all other festivals in the same way. By scrolling on Twitter.

Holi is very special to the people in India. All the communities come together, to celebrate the victory of triumph over evil. Apart from playing with the colours, people also prepare unique delicacies, meet and greet their near ones and have fun together. Though the rituals and mythological significance of the festival vary from place to place, the festivity is celebrated with equal high spirits everywhere. Happy Holi everyone!

(The above story first appeared on LatestLY on Mar 21, 2019 03:08 PM IST. For more news and updates on politics, world, sports, entertainment and lifestyle, log on to our website latestly.com).