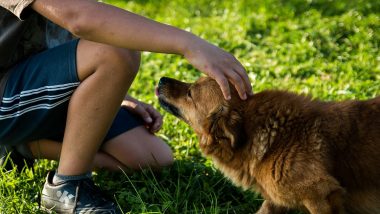 Dehradun, February 27: In the event of a crisis, our first priority is to save ourselves and our families. People who have owned pets would know that they are family too.

While a majority of people choose the easy option of letting their pets go, there are others who refuse to leave them, no matter what. In fact, an instance has come to light from Ukraine where 21-year-old Rishabh Kaushik, a third-year student of software engineering at the Kharkiv National University of Radio Electronics in east Ukraine, has refused to leave the war-torn country without his pet dog Maliboo in this difficult times.

According to a report in Times of India, though he tried hard to get the necessary clearances for his mixed-breed pet so that he could fly out with him to India, he could not get the necessary approvals. Despite the situation in Ukraine he chose to stay there with his pet as he could not abandon him in these tough times.  ‘Buddies Then and Now’: Bhuvneshwar Kumar Shows Friendship Bond He Shares With Pet Dog Alex in Cute Instagram Pictures (See Post)

Kaushik adopted Maliboo from a local resident who rescued the puppy from the streets. He said he was in Kharkiv but "luckily" decided to leave for the nation's capital, Kyiv, with Maliboo just a day before Russia's attack on the city Thursday morning.

"When I left Kharkiv on February 23, I took Maliboo with me. There was no question of abandoning him," he said. Kaushik's family had arranged the required documents and air tickets for him to come to India via Dubai on February 20. They are based in Dehradun.

"I refused. I said I would come after two or three days once I could get all necessary clearances for Maliboo to fly with me. I had felt that despite the tensions, war won't break out but, unfortunately, it did," he said, adding that he had initiated the process to procure a no-objection certificate (NOC) for his dog on February 20. Kunal Kemmu Dedicates His New Tattoo to His Late Pet Dog Masti and Its Too Cute! (Watch Video)

Kaushik could be seen pleading with officials of the Indian embassy to grant him the NOC in screenshots of emails shared by him with TOI.

"They asked me for some documents to grant permission to my pet to fly with me. Despite the difficult situation, I provided them. But they asked for more documents a few days later, which were impossible for me to procure as the attack had already begun. I pleaded but to no avail," he said.

Kaushik's father Madhukant Kaushik said, "He is not ready to leave his dog behind at any cost. We just hope that the situation normalises and both safely exit the country and come back home."

(The above story first appeared on LatestLY on Feb 27, 2022 01:41 PM IST. For more news and updates on politics, world, sports, entertainment and lifestyle, log on to our website latestly.com).