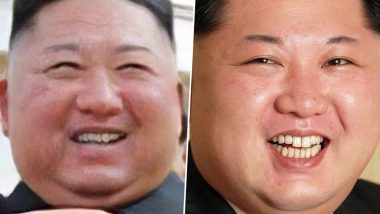 After intense speculations about the health of North Norean leader Kim Jong Un, he made a public appearance at the ribbon-cutting ceremony of a factory last week. But looking at his recent pictures, netizens believe it wasn't the leader himself but his body double! Twitterati has compared old and new pictures of the North Korean leader and pointed out differences in the appearance. It raises doubt on his health even more, if he is really using a body double? With people on the internet having a careful eye for detail, they point that there is quite a difference between Kim's old appearance and the recent one on May 2.

Reports of Kim's ill health were doing the rounds, ever since he underwent heart surgery. Post which a lot of reports emerged, some claiming he was brain dead, others declaring him dead. But putting an end to all the speculations, Kim Jong-un made an appearance in public after 20 days of no show. He attended an event in Sunchon, near the capital Pyongyang, where he cut the ribbon of a fertilizer factory. Pictures from the event were quick to surface online. A closer look into them, Twitterati pointed there's a difference in his teeth and ears. Kim Jong Un Not Believed to Have Received Surgery, Says South Korea Day After North Korean Leader Appears in Public.

Who Cut The Ribbon?

Was the "Kim Jong Un" who cut the ribbon at that fertilizer plant a body double or nah? https://t.co/QZvX2v5p08

Totally different. Look at those gnashes, if you must. pic.twitter.com/efPmn0f5ox

Or May be Not!

Totally different. Look at those gnashes, if you must. pic.twitter.com/efPmn0f5ox

People are saying that kim jong un who has appeared is a body double or clone.

By looking at these photos, I now too have serious doubts 😸#kimjongun pic.twitter.com/cqoeESuCkq

Or is it Photoshop?

FYI, the photo that's been circling around to prove that #KimJongUn was replaced by a body double has been heavily photoshopped. pic.twitter.com/ciKXprUn5V

So as the speculative theorists go on to say it was a body double, Daily Mail reported on the same that the changes are far more subtle and seem vague. It also states that the new marks observed on his wrists could be due to the surgery procedure that he underwent in this time. It is a point to note, that some of the photos used in the comparison are many years old, so it cannot be exactly concluded if Kim has used a body double.

(The above story first appeared on LatestLY on May 07, 2020 06:32 PM IST. For more news and updates on politics, world, sports, entertainment and lifestyle, log on to our website latestly.com).