Lund University in Sweden Spends Hours Deleting Hundreds of Unsolicited Comments From Indians and Pakistanis Over Its Name From Their Facebook Page, Tells People to Share Jokes Directly With Friends!

Lund University, one of the prestigious universities in Sweden has been every now and then become material for funny jokes and memes on the internet for its name. The mockery has been going on so much that they have to delete hundreds on comments by Indians and Pakistanis on their verified Facebook page that comes with every single post. 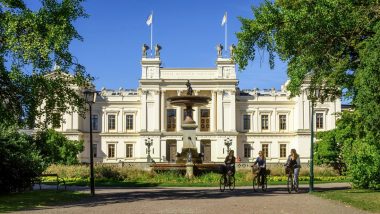 Lund University, one of the prestigious universities in Sweden has been every now and then become material for funny jokes and memes on the internet for its name. The mockery has been going on so much that they have to delete hundreds on derogatory comments by Indians and Pakistanis on their verified Facebook page that comes with every single post. As the ridicule continued, they released a statement addressing people who are trying to defame them. The posts explain the meaning of the word in Swedish and tell people to be respectful towards cultures and languages around the world. Facebook user Saswata Sarkar shared a screenshot of the university's statement saying how shameful it was an international university had fallen prey to some people's terrible taste in humour. Lund is a slang term for penis in Hindi, so the majority of Hindu speaking population in India and Pakistan and others use the word. Due to which people of these countries often mock the university which is named as Lund forgetting that it means something completely different in another language. Pakistani Newspaper’s Headline Asking ‘Lund’ to Keep ‘Iron Rod’ Ready Should Be Given ‘No Ball’ Prize Says Twitter.

Lund University is one of northern Europe’s oldest universities located in the city of Lund in the province of Scania, Sweden. Saswata Sarkar in the caption writes, "Hi folks. Those of you who were creating content by making fun of the University and by sharing it your friend's wall you guys have successfully made a global outreach by defaming the University as well as letting down the name of the country. Congratulations bright young minds. I hope you find this relevant and owe up to your mistake. I feel ashamed to tag you all. My heartfelt apologies to Lund University (sic)". This Time 'PTI's Lund Gets The Axe' as Pakistan media Loves to Play With Iftikhar Ahmed's Surname and Twitter Can't Keep Calm.

Lund University's statement reads, "We have had this Facebook page for ten years now and every now and then it is ‘rediscovered’ by students in certain countries who spread it to their friends. We are well aware that our name is entertaining to you and with thousands of languages in the world, there will of course always be words that sound funny in another language. Lund is the name of a medieval town in Southern Sweden. The word means “green area” and is pronounced in a very different way in Swedish than the word that you are thinking of in your language (sic)."

(The above story first appeared on LatestLY on Jul 25, 2020 07:30 PM IST. For more news and updates on politics, world, sports, entertainment and lifestyle, log on to our website latestly.com).