Maharashtra Floods: From Tying Rakhi to Touching Feet, This is How Women of Sangli and Kolhapur Are Thanking NDRF and Indian Army

While the rescue operations are in full force, those saved from the floods can only thank the rescuers for their lives. In Maharashtra's Sangli region, women thanked the Army personnel by tying them a rakhi, ahead of the festival of Raksha Bandhan. Watch the emotional video here. 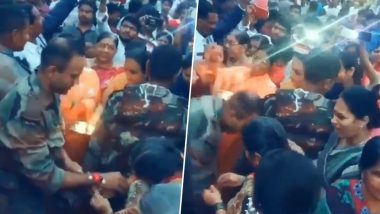 The western part of Maharashtra is severed by the floods. Following a heavy downpour of incessant rains and water let out from the dams, districts of Sangli, Satara, Kolhapur have been heavily submerged in waters. While the rescue operations are in full force, those saved from the floods can only thank the rescuers for their lives. Women have expressed their gratitude in the form of tying rakhis or be it touching the feet of their saviours. In Maharashtra's Sangli region, women thanked the Army personnel by tying them a rakhi, ahead of the festival of Raksha Bandhan. Raksha Bandhan 2019 will be celebrated on August 15 this year. A video of people getting emotional and celebrating Raksha Bandhan with the Army officials has been shared on Twitter by the Indian Army Twitter account.

The floods situation in the western districts has affected over lakhs of residents. Over 30 people have died and several have gone missing. The Army, Navy and Disaster Response Force (NDRF) are collectively working for the rescue operations. And to thank their 'saviours', women tied rakhis to the Army and NDRF personnel in both Sangli and Kolhapur districts. Video of these emotional moments have been shared on Twitter and it is indeed sad and heartwarming at the same time to see the connect here. While some people have lost all of their livelihood in the floodwaters, they have managed to find a rescuer and make them their family.

It is quite an emotional moment for not just these women but the officials who have saved so many lives. The video has crossed over 5 lakh views and about 17000 likes. People have commented on how proud they are about the Indian Army. From "eye-soothing" to "heart-touching" this video has indeed made netizens teary-eyed. A day ago, another video of a woman touching the feet of soldiers who saved their lives went viral. The soldiers were rescuing the woman along with other people in a relief boat. The woman can be seen touching the feet of the soldiers to express gratitude.

While Sangli women celebrated Raksha Bandhan, a similar scene was observed in the flood-affected region of Kolhapur. Women from Rajapur village tied Rakhis to the Navy officials for saving their lives and serving them hope. The floods have caused immense damage in the regions across the country and it is heartwarming to see these celebrations.

(The above story first appeared on LatestLY on Aug 12, 2019 05:42 PM IST. For more news and updates on politics, world, sports, entertainment and lifestyle, log on to our website latestly.com).