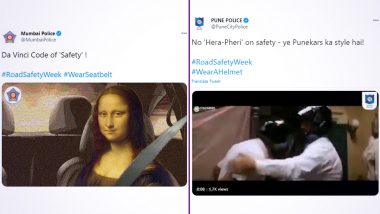 A Road Safety Week is observed every year from January 11 to January 17 every year in India to make the roads and streets safer, avoid accidents on the road and following all the traffic rules. Various events and awareness campaigns are held to inform people about road safety, encourage following all traffic rules, safe driving and so on. Part of the awareness is created on social media as well. Mumbai Police and Pune Police have effectively started their Twitter awareness for this Road Safety week. Both their Twitter accounts are known for spreading the message creatively. Mumbai Police has used a Da Vinci reference, while Pune Police used a scene from Hera Pheri film to raise awareness about road safety.

Mumbai Police tweeted the Mona Lisa painting, but making it seem like she's riding a car and wearing her seat belt. In the caption they called it the 'Da Vinci Code of Safety'. While Mumbai Police highlighted the importance of seat belt, Pune police created an awareness on wearing helmets. They attached a clip from the film Hera Pheri which sees Raju (Akshay Kumar) wearing a helmet to Babu Bhaiyya (Paresh Rawal). Their caption read, "No ‘Hera-Pheri’ on safety - ye Punekars ka style hai! #RoadSafetyWeek #WearAHelmet" Mumbai Police earlier used a Yashraj Mukhate's video of Zakir Khan's dialogue to give awareness on safety rules.

Both the official handles are creatively spreading awareness on things even on regular days. Now, for this entire week, they will likely come up with similar tweets on different aspects of road safety to give awareness messages. Such creatively designed messages strike a chord with the audience better.

(The above story first appeared on LatestLY on Jan 12, 2021 01:54 PM IST. For more news and updates on politics, world, sports, entertainment and lifestyle, log on to our website latestly.com).