After hearing about the incident, people in the community helped to clean the memorial. Because young Clopp's courage and fight against the disease had been an inspiration to the whole hometown. 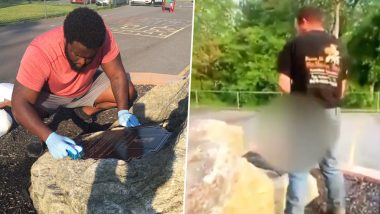 Some people can go to the extremes for their definition of 'fun.' Two young boys from New Jersey decided to do something really mean after they both were drunk. One of them named Bryan Bellace was filmed urinating on the memorial of a 9-year-old South Jersey boy who passed away from brain cancer. Both the boys were 23-year-old and the video was shared online. After hearing about the incident, the two boys were arrested, while the people in the community helped to clean the memorial. Drunk Man Urinates on Woman Passenger's Seat in Air India International Flight.

Bryan Bellace and his friend Daniel Flippen were caught having mischief near the Underhill Park at Mays Landing. In a video captured by Flippen, Bellace was seen peeing on the memorial of Christian Clopp, who died of cancer about 5 years ago. The video was shared on social media and someone in the know of Clopp family, brought it to their notice. The incident was sure shocking for them. Talking about it Clopp's father was quoted to NJ Advance Media, "Having lost a child to cancer, it’s devastating to say the least. All you have are those memories and to see someone purposely desecrate a memorial to your child, it’s painful."

Here's The Video of Young Man Peeing on The Child's Memorial:

The police were able to identify the boys through the video, although the original video was taken down from Snapchat. Bellace was charged with lewdness, disorderly conduct and criminal mischief. His friend Flippen was charged for having an alcoholic drink open in the park. After hearing about the incident, people in the community helped to clean the memorial. Because young Clopp's courage and fight against the disease had been an inspiration to the whole hometown. The boy's father also thanked the people around who were so supportive of the family. Urinating in Public! Woman in London Caught on Cam Peeing in the Middle of Sidewalk, Video Goes Viral.

These were the men who saw the video and decided to help the family by cleaning up the mess. "We come together. This is our community. When stuff like this happens, we come together. We take care of what needs to be done," Burgan said. It is indeed great of the men to come forward and help, we can not imagine the pain this video must have caused to the family all over again.

(The above story first appeared on LatestLY on May 20, 2019 05:48 PM IST. For more news and updates on politics, world, sports, entertainment and lifestyle, log on to our website latestly.com).