Video of a pregnant dog being abandoned in front of an animal care centre has gone viral on social media. The incident was caught on camera outside Campbell County Animal Shelter. 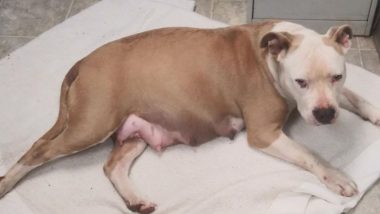 Video of a pregnant dog being abandoned in front of an animal care centre has gone viral on social media. The incident was caught on camera outside Campbell County Animal Shelter. A group of people came in a car, got the dog out of it and dragged it to the concrete platform. Kelsey Wright who works at the shelter and found the animal there the next morning. The dog named Tillie was lying there for more than 12 hours. Animal Cruelty: Pregnant Cat Hanged to Death in Front of a House in Kerala, Case Booked.

Kelsey was quoted as saying, "You know, it just astounds me that someone didn't think to ask for help. They just took matters into their own hands and did what they wanted to do." Animal Control Officer Benny David said, "It's not right to put an animal out to spend a night in the cold." He added, "We need to know where they come from, what reason enough had to have health problems. Were there any other problems with animal? We need to know of its owner. They can sign an owner surrender." Friends of Campbell County Animal Control took to Facebook explaining the incident following the post went viral.

David said that the people who abandoned Tillie does not seem to be her owners. Right now, Tillie is at a local vet where she is being taken care of. The shelter is trying to find out the people who left Tillie out in the dark alone.

(The above story first appeared on LatestLY on Dec 03, 2019 09:43 PM IST. For more news and updates on politics, world, sports, entertainment and lifestyle, log on to our website latestly.com).