SRH vs RCB Meme Comparing Girls and Boys Discussing The IPL 2020 Game Gets a Befitting Reply From a Girl Calling Out The Stereotyping; Netizens Are Impressed 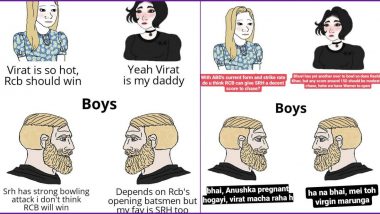 The IPL 2020 season has begun and fans of cricket are excited to see their favourite players back on field after so many months. The anticipation of every match is seen on social media as people share memes and jokes along with the updates. Royal Challengers Bangalore played against Sunrisers Hyderabad yesterday with RCB registering a win by 10 runs. Now the game of cricket may have more boys as fans but girls can be just as updated with the sport. Something similar was seen on Twitter when a user shared a meme drawing comparison between Girls and Boys talking about the game. But calling out to the stereotypes, a girl's reply to the same tweet is winning appreciation online.

Funny memes on RCB are very common on Twitter and even the match win got some funny reactions. But one of the memes compared a Girls vs Boys conversation of the match. Twitter user @firkey_ shared a meme for #RCBvsSRH match in which girls' dialogues read, "Virat is so Hot, RCB should win" while another said, "Yeah Virat is my Daddy." In the same picture the boys' dialogues were why SRH should win and discussing the form of players. The meme got over a 1,000 likes and 400 plus retweets. In response to this, a girl named Alisha tweeted and "fixed" the meme. In her version, she showed the girls talking about the players current form and the score to chase while the boys discussed how Anushka Sharma is pregnant and they would die a virgin! Her response to the classic stereotyping is going viral and people have appreciated it. Who Are Simranjeet Singh, Paritosh Pant and Dr Nayak? Know About The COVID-19 Heroes After Whom Virat Kohli, AB de Villiers and Yuzvendra Chahal Have Set Their Profile Names on Social Media.

People have appreciated her response and agreed that it fits true. Check some tweets:

This tweet has given out a message that girls do understand the sport and can discuss it just as well with the boys, other than just loving the players for their looks. If you are a girl who enjoys the game of cricket or the ongoing IPL series, then you can clearly relate. So the next time if someone tells you that you don't understand because you're a girl, just show them the meme!

(The above story first appeared on LatestLY on Sep 22, 2020 11:28 AM IST. For more news and updates on politics, world, sports, entertainment and lifestyle, log on to our website latestly.com).