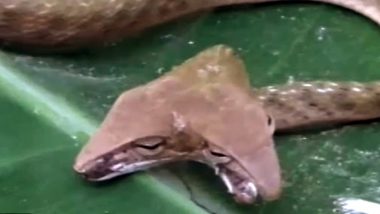 Two-headed snake makes for a horrific sight. While there is a scientific explanation to it, two-headed snakes are often associated with superstition as well. Recently, Bali was shocked after a two-headed snake was seen in the streets of a small village in the Tabanan region. The two-headed snake was initially found by a group of children who surrounded the snake and also recorded it on a phone. However, a man soon began to examine the snake by using a stick to flip it over. The video of the two-headed snake from Bali is going viral. The snake can be seen placed on a large banana leaf and some yellow flowers can also be seen placed around it. Unusual creatures like this two-headed snake are oftentimes worshipped by people as they considered to be the incarnation of the deities. Rattlesnake Dancing! Check The Rare Combat Dance Video of Two Deadly Snakes in Virginia

However, the condition of snakes developing two heads is often a result of a biological process called bicephaly. This is also a phenomenon that may cause children to be born with two heads. Bicephaly also leads to the birth of conjoined twins. The snake must have suffered from the biological phenomenon as well. Rare Two-Headed Viper Snake Found in House-Garden in Virginia, Watch Video.

Last year, a rare type of two-headed viper snake was found at a residence in Northern Virginia as well. The woman found who found the rare creature in the garden outside her house and immediately called the rescue helpline. Two-headed snakes are quite rare creatures, they are often illegally sold and bought. In Mumbai, India last year, three people were arrested for trying to sell a red sand boa or the two-headed snake for Rs 15 lakh in Panvel.

(The above story first appeared on LatestLY on Sep 05, 2019 02:29 PM IST. For more news and updates on politics, world, sports, entertainment and lifestyle, log on to our website latestly.com).