A video is going viral on social media, which shows a desi bride and groom dancing happily while taking their “saat pheras.” The clip attracted mixed reactions online. While some users criticised the couple, others wrote in their support. 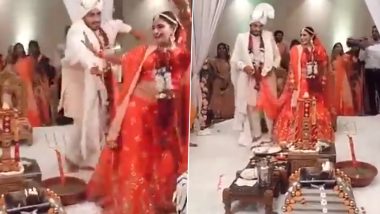 There are weddings, and then there are Indian weddings. You will find plenty of things different and joyous in a desi wedding, following different traditions and cultures around the country. Social media these days are filled with adorable couples getting married, engaged in so many different ceremonies to make their big day memorable. Some are hilarious; others provide elaborate experiences. Amid all of it, this video goes viral on social media, which shows a desi bride and groom dancing happily while taking their “saat pheras.” The clip has gone viral, but attracted mixed reactions online.

Saat phere, (seven rounds), is an important part of the Hindu wedding where the bride and groom walk around the holy fire together, and pray for a happy future. Each phera has a different vow, which is read out by the priest before the couple becomes husband and wife. The video captures the exact moment, but in a different experience, the couple was seen joyously dancing while taking the pheras. Indian businessman, Vedant Birla shared the clip on Twitter by terming it ‘disrespectful’ to the Hindu culture. The couple dressed in heavy wedding attire, danced to the song Mere Yaar Ki Shaadi Hai, during their phera ceremony. Madurai Couple Prints Digital Scan Code on Wedding Invitation for Guests to Send Gifts, Post-COVID Wedding Trends Continue.

“Is this marriage or sacrificial rituals? Do not forget that you are worshipable in the world, only because of your culture and values,” translated the caption which Birla wrote in Hindi. ‘Hold on Babe,’ Latest Funny Meme Trend Is the Best Thing on Internet RN!

The video received thousands of views, retweets, likes and comments and sparked a heated debate on the microblogging platform. While some users criticised the couple, echoing Birla’s tweet caption, others wrote in their support, noting they are the bride and groom who are just enjoying their wedding rituals.

'That's Not Our Culture'

Pathetic..I hate it even when bride comes dancing..that’s not our culture!!

'Saat Phere Is A Ritual & Not Party'

Those who do not wana live with joint family, do not know about the rituals should not talk about it. 7Phere is a ritual not a party! Differentiation between ritual and enjoyment is different.Enjoy your party and do the rituals as it is to be done. Be open minded but not foolish.

Others Supported the Couple

I see 2 people (probably in love) enjoying THEIR UNION, why the butthurt?

This could be a round of joy after the ritual and this may not be the full clipping. How about those who marry with all rituals and then mentally and physically abuse the same lady? What do you wanna say about those sanskaar?

This User Claims the Dance Was Done After Rituals

Vedant Birlaji... This girl is my sister's friend... and I know her quite well... and this dance was done after all the rituals... If you don't know the background better not to comment...

The couple in the video is not identified, but their way of taking pheras on their wedding day sure sparked reactions. However, as user @krazypri commented, the dance was done after following all the rituals. But some went on blaming Bollywood for ruining Indian Hindu marriages, and others believed that the couple did nothing wrong. What do you think of such a marriage celebration?

(The above story first appeared on LatestLY on Mar 05, 2021 02:02 PM IST. For more news and updates on politics, world, sports, entertainment and lifestyle, log on to our website latestly.com).