The video, shared on Twitter shows a woman enjoying her pool time. But she immediately freaked out, when she spotted an uninvited baby crocodile joining her in the water. The hilarious video is going crazy viral on Twitter. 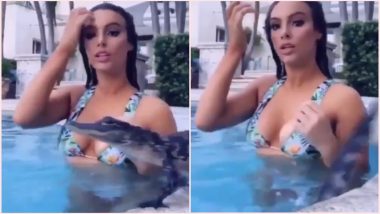 We said it earlier, we say it again that social media has some amazing content to unfold for us. Every hour, something or the other comes up on the internet which captivates the netizens online. In a similar manner, another video has surfaced on Twitter and here again, we are struggling with words and laughing at the hilarious moment at the same time. The video, shared on Twitter shows a woman enjoying her pool time, and admiring herself in front of the camera, posing for amazing snaps, maybe. But she immediately freaked out, when she spotted an uninvited baby crocodile joining her in the water. The hilarious video is going crazy viral on Twitter. Gigantic Alligator 'Chubbs' Strolls Into a Florida Golf Course, Freaks Everyone Out.

The tweet is shared by journalist Hannah Jane Parkinson, who claims the video to be her favourite this year. The woman can be seen jumping out of the water, the moment she realises the baby crocodile to be inside the pool. At the time of writing this, the clip has received 4.7 million views and looking at its popularity, the count is surely going to go up.

quite possibly my favourite thing this year pic.twitter.com/EE5IyiuJjk

Imagine yourself to be in the same situation, would you be freaked out like her too? Baby crocodiles are considered less aggressive. But if they receive any harm from other animals or human beings, they bite with their little and very sharp teeth.

(The above story first appeared on LatestLY on Aug 05, 2019 08:05 PM IST. For more news and updates on politics, world, sports, entertainment and lifestyle, log on to our website latestly.com).