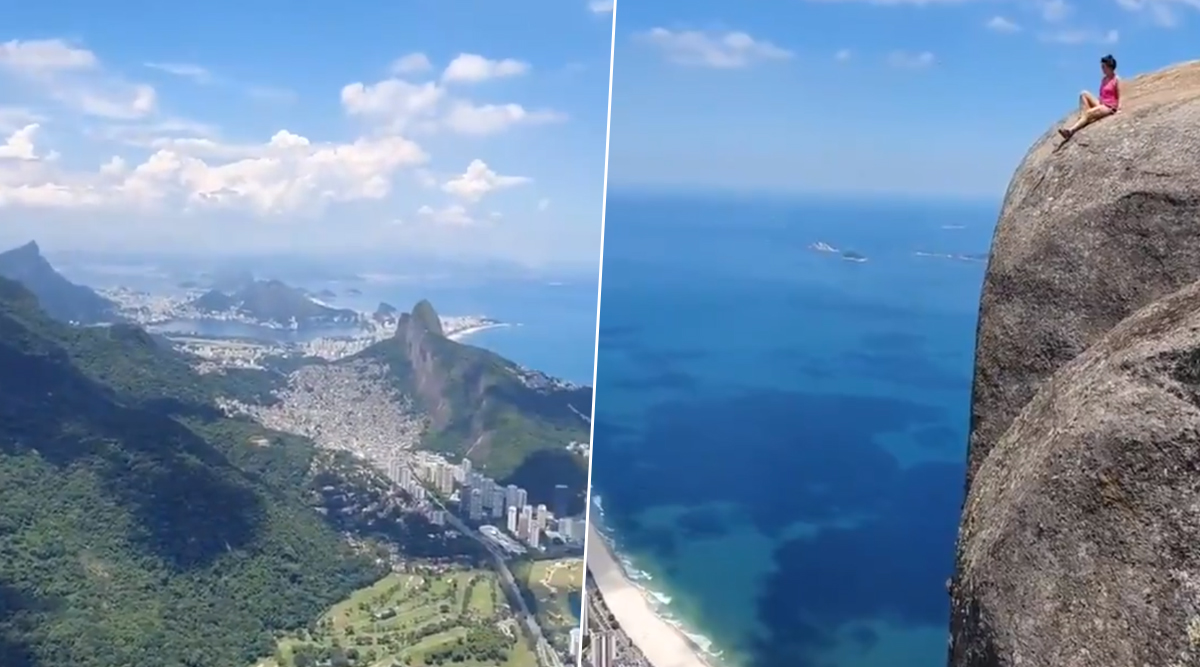 There are enough spots in the world that are for absolute thrill-seekers. But this one spot in Rio de Janeiro, a rock climbing site Pedra da Gavea can be among the most dangerous ones, for photo attempts. A video of a woman sitting on this curvy rock, wearing no harness and sliding at the edge to click a picture has been shared online. The rock slants down and below is directly an ocean. A little move can prove fatal but the woman in the video seems to calm. The video of this photo attempt is scaring netizens and it is definitely not for the faint-hearted or even those who have the slightest fear of heights. Highest Handstand! Norway Gymnast Performs Death-Defying Stunt at 1300 Ft on Rampestreken Viewpoint to Mark His 40th Birthday, Watch Video.

The video was shared on Twitter by user Jamie who goes by the handle @gnuman1979. It shows a woman sitting on the edge of Pedra da Gavea in Rio, Brazil. With no harness whatsoever, she goes on sliding further to click a picture. But the video shows that there is no cover below other than an ocean on one side and a dense forest on the other. It is a really scary video and even people on the internet are feeling the chills. London Daredevil Scales Western Europe's Tallest Tower 'The Shard' (Watch Video).

There is no fucking way. pic.twitter.com/LH1uigI5QE

Are you feeling scared too? Like a slight movement would've definitely cost her her life, but she seems so calm! Twitterati, however, did not receive this video so calmly. It has got over 4 million views and some of them agreed that they got anxiety on seeing it.

Check How People Reacted to This Video:

I got anxiety just watching this.

Stomach in My Mouth

My stomach went into my throat for a minute. 😨

Clutching the life insurance policy hidden in his pocket...

Breathtaking Would Mean This!

I literally stop breathing just seeing her take another move on the edge! 😮 pic.twitter.com/j7NgvVPZUa

The video really takes thrill to some next level! But some people also commented that this is a popular spot for such tourists who love taking risks and thrills.

In case you want to know more about this spot, the Pedra da Gávea is a monolithic mountain in Tijuca Forest, Rio de Janeiro, Brazil. It is elevated at 844 metres (2,769 ft) which makes it among the highest mountains in the world which ends directly in the ocean. It is a very popular spot in the country for adventure seekers. Another interesting feature of this mountain is, it looks like a human face from one of the sides.