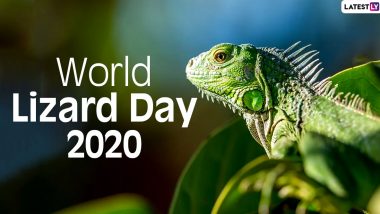 World Lizard Day is observed on August 14 recognising the amphibian species. To educate children about these reptiles, on World Children Day, usually, workshops are held in schools, national parks and museums. Lizards are critical to the ecosystem as they complete the natural cycle by being both predators and prey. They eat insects and rodents and are food for birds. Lizards have been around for more than 250 million years mostly live in deserts, forests, and rocky warm areas. Did you know that lizards can move their eyelids? Yes, they have eyelids unlike other reptiles and can move it also! On World Lizard Day 2020, we bring to you some interesting facts about these creatures. Giant Lizard That 'Eats Anything It Wants' Seen in Georgia, Know More About This Argentina Tegu Species.

There are varied kinds of lizards, all come in different sizes and colours. Most of these squamate reptiles are known for their different characteristics depending on the geographical regions they live in. Some of the lizard species have unique features which are hard to believe. On World Lizard Day 2020, here are certain things about lizards you probably didn't know.

As lizards are important for the ecosystem, they are required to be a part of us. You can create awareness about the observance by posting a picture of a lizard with only the facts mentioned above on social media. You can share using the hashtag #WorldLizardDay.

(The above story first appeared on LatestLY on Aug 13, 2020 08:00 PM IST. For more news and updates on politics, world, sports, entertainment and lifestyle, log on to our website latestly.com).